Bollywood actress Rani Mukerjee celebrates her birthday today (March 2). With a career spanning for almost 20 years, she’s still relevant and loved by her fans. And as she turns 43 today, let’s take a look at her top performances that were entertaining and pathbreaking as well. 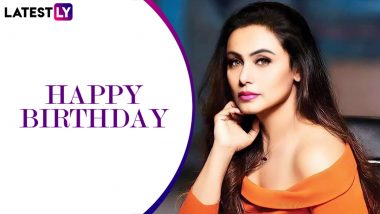 Bollywood actress Rani Mukerjee celebrates her birthday today (March 2). With a career spanning for almost 20 years, she’s still relevant and loved by her fans. From doing commercial roles to then picking up projects that are women-centric, she has come a long way. Rani is married to YRF’s Aditya Chopra and is also mother to daughter Adira. Having said that, over the years, she has worked in some amazing films proving there’s none like her. And as she turns 43 today, let’s take a look at her top performances that were entertaining and pathbreaking as well. Rani Mukerji To Celebrate Her 43rd Birthday With Fans on Social Media, Says ‘They Have Been a Constant Support System for Me Over the Years’.

The highlight of this film was definitely the romance between Rani and Vivek Oberoi. The actress played the role of Dr Suhani who elopes to marry the love of her life, unaware of the aftermath of her impromptu decision. Her struggles in life and how she balances it forms the premise of the movie.

This YRF movie starred SRK and Preity Zinta as the leads and saw Rani in a supporting role. She played a lawyer who gets involved in a cross-border love saga of Veer and Zaara. Despite having less screen time, she did shine as Saamiya Siddiqui.

One of the biggest films of Rani’s career was without thought Black. Even after starring alongside megastar Amitabh Bachchan, the actress did create an impact as a deaf, blind and mute person. She played the role of Michelle McNally, inspired by Helen Keller.

Rani and Abhishek Bachchan as the most wanted con artists in this film made fans believe that the former can pull off any role with ease. This 2005 movie was fun to watch as the actress totally nailed it with her small-town loud kinda girl role. A must-watch!  Rani Mukerji Birthday: 6 Dialogues by the Actress That Make Our Hearts Go Aiyya.

Karan Johar’s this masterpiece stirred conversations as it was based on infidelity. Rani played the role of a perfect woman, who cheats on her husband, as she ain’t happy with her marriage. The actress was a stunner in each frame and brought many emotions as Maya Talwar.

Playing unconventional characters on the celluloid is risky, but Rani managed to impress one and all by portraying the role of a teacher with Tourette’s syndrome. This was a great him in her career, considering the awareness around the same is way too less in India. The film sent out the right message, all thanks to Rani.

No One Killed Jessica

Rani Mukerji played the role of a journalist in No One Killed Jessica and she was simply fantastic in it. The actress took a step ahead in her career by doing a role not many would have expected from her. She went on to win Filmfare Award for Best Supporting Actor (Female) for her performance in it. Rani Mukerji Birthday Special: A Sabyasachi Muse; Their Bong Connection Working Like Magic, One Resplendent Ensemble at a Time!

Rani was last seen on the big screens in Mardaani 2 and her fierce cop avatar was loved by the audience. This gritty thriller can easily be termed as one of the best women-centric works of the actress as her character, Shivani Shivaji Roy was phenomenal.

That’s it, guys! The above-mentioned movies are the b’dy girl’s best performances. Of course, Hum Tum, Talaash, Laga Chunri Mein Daag to Aiyya are a few more films that echo Rani’s brilliance. Workwise, she will be next seen in Bunty and Babli 2 opposite Saif Ali Khan that is arriving on April 23 this year. Happy Birthday, Rani Mukerji. Keep slaying!!!

(The above story first appeared on LatestLY on Mar 21, 2021 12:00 AM IST. For more news and updates on politics, world, sports, entertainment and lifestyle, log on to our website latestly.com).