Priyanka also starred in the music video for 'Sucker' along with Danielle and Sophie. 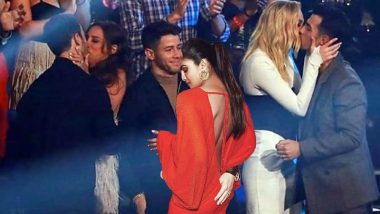 Washington DC, August 28: No matter where she is, global icon Priyanka Chopra is always the Jonas Brothers' biggest cheerleader and her latest post is proof. During this year's 2019 MTV Video Music Awards (VMAs), which took place on Monday night, some fans noticed that Kevin Jonas and Joe Jonas were both enjoying the award ceremony along with their wives. But when it came to Nick Jonas, he was celebrating the big night without his lady love.

Before you start to speculate that there's some trouble in paradise, calm your horses, the Quantico star took to Instagram to congratulate her doting husband and his brothers on their big win. She also noted that she's always there by her husband's side. The Mary Kom actor hilariously photoshopped herself into a photo at the MTV awards to show some love to her husband after the Jonas Brothers' win in the best pop category for their single Sucker. Jonas Brothers’ ‘Happiness Begins’ Album Cover Has Called for a Meme Fest on Twitter; Check Out Some of the Funniest Ones.

I’m always with you @nickjonas 😜😍Congratulations @jonasbrothers! I’m so proud of all of you! #sucker

In the still, Sophie Turner and Danielle Jonas, are passionately kissing their respective partners Joe and Kevin, while Nick stands alone in the middle of the two couples. Priyanka added herself into the picture and could be seen cuddling up close to her beloved husband. "I'm always with you @nickjonas," she captioned the post after photoshopping herself into the group photo."Congratulations @jonasbrothers! I'm so proud of all of you! #sucker," she added in the caption.

Best pop video!! Thank you! We have the best fans in the world for voting for sucker! A win like this in our home town means the world. #vmas

Nick also shared his excitement over the big win by sharing a post on the photo-sharing application. "Best pop video!! Thank you! We have the best fans in the world for voting for sucker! A win like this in our home town means the world. #vmas," Nick shared on Instagram after the award ceremony. Joe added, "THANK YOU! Best fans ever. These Moon People are coming home with us."

Turner also took a moment on social media to celebrate the Sucker win, which is the first song the pop band released together since they reunited in 2019 after a hiatus of almost six years. Priyanka also starred in the music video for 'Sucker' along with Danielle and Sophie.

During the award show, the boy band won the Best Pop award for their hit single Sucker, reported People. The Jonas Brothers performed the night before the big awards show at the famed Stone Pony stage in Asbury Park, New Jersey and then attended the award ceremony on Monday night.

The pop band is currently travelling as part of the Happiness Begins Tour. During the opening night of the tour earlier this month, Priyanka joined Sophie and Danielle to support and cheer for the band.