MLA Raghav Chadha recently sparked controversy by calling Congress leader Navjot Singh Sidhu, the Rakhi Sawant of Punjab politics, on Saturday, Rakhi herself addressed the situation and responded to the name-calling. While interacting with the media, when asked to comment on the scenario, 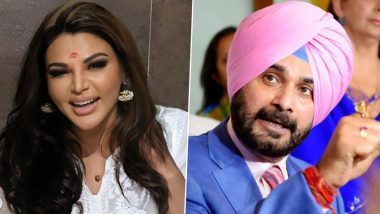 MLA Raghav Chadha recently sparked controversy by calling Congress leader Navjot Singh Sidhu, the Rakhi Sawant of Punjab politics, on Saturday, Rakhi herself addressed the situation and responded to the name-calling. While interacting with the media, when asked to comment on the scenario, she lashed out at the AAP politician and said, "Raghav Chadha, stay away from me and my name. Jo Mr Chadha ho na, mera naam loge toh tumhara chadha utaar dungi." Jason Sudeikis Birthday Special: 10 Awesome Quotes of the Actor From Ted Lasso That You Should Check Out.

"Keeping such hateful mentality towards women is not at all right," he said.

Advising the AAP MLA to keep his language in check, Ritesh continued, "You can't spoil someone's personal life for your own political benefit. If I want I can take legal action on you but there seems to be a lack of maturity in you, hence I am leaving you thinking that you are an immature person." For the uninitiated, the entire controversy erupted when Chadha, on Friday, tweeted, "The Rakhi Sawant of Punjab politics -Navjot Singh Sidhu- has received a scolding from Congress high command for non-stop rant against Capt. Therefore today, for a change, he went after Arvind Kejriwal. Wait till tomorrow for he shall resume his diatribe against Capt with vehemence."

Chadha's comment came after Sidhu had earlier criticised Arvind Kejriwal in his video message on Twitter. Along with it, he tweeted, "Exploitation of farmers and decreasing prices even on crops where MSP is announced - @ArvindKejriwal Ji you notified the Private Mandi's central black law! Has it been de-notified or the masquerading is still going on? " Hitting back at Chadha after the 'Rakhi Sawant' jab, Navjot Singh said the former is still descending from the apes and the monkeys.

On Twitter, he wrote, "They say man descended from the apes and the monkeys, Looking at your mind Raghav Chadha. I believe you are still descending! You still have not answered my question about notifying the Farm Laws by your Government." Chadha's jibe at Sidhu didn't go down too well with netizens and he received flak for being a 'misogynist'. "Excuse me, what has Rakhi Sawant to do with this?" wrote one user. "Didn't expect this awful misogyny from you Raghav. You have to conflate an insult to a rival with a woman. Shameful. Apologise to Rakhi Sawant," another one commented.

Kavita Kaushik, who was with Rakhi in 'Bigg Boss 14' also took to Twitter to mention that Rakhi is a compliment.

"Rakhi Sawant- the most hard working who gives her hundred percent loyalty and effort to each project she takes, turning a dull flop show into an entertaining one, she is a compliment compared to the hateful fake counter parts," she wrote. Rakhi was last seen on 'Bigg Boss 14' and was known for her crazy antics on the show. She was one of the finalists of the reality series, while Rubina Dilaik was the winner.