Get latest articles and stories on Sports at LatestLY. Maziya Sports and Recreation revived their AFC Cup 2022 knockout stage hopes and set up a thrilling final day of Group D action with a deserved 1-0 win over Gokulam Kerala FC on Saturday. 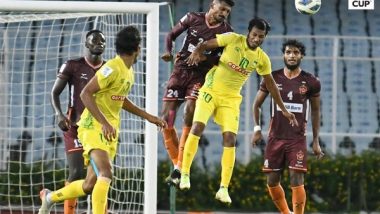 A Cornelius Stewart goal shortly after half-time settled the tie, leaving all four teams in the group on three points ahead of Tuesday's third and final matchday at Kolkata's Vivekananda Yuba Bharati Krirangan Stadium.

Also Read | India vs Pakistan Asia Cup 2022 Preview: Live Streaming and Telecast, Head to Head, Squads and Other Things You Need To Know Ahead of IND vs PAK Hockey Match.

That means every kick will take on significance when Gokulam Kerala face Bashundhara Kings in their final match, while Maziya will go into the group finale against ATK Mohun Bagan knowing exactly what is required.

While Gokulam Kerala were riding high following Wednesday's brilliant 4-2 win over ATK Mohun Bagan, Maziya came into the tie desperate for the win that might revive their campaign, and it was the Maldivian side who largely controlled the goalless first half.

Gokulam Kerala boss Vincenzo Alberto Annese shuffled the deck with a pair of half-time substitutions, but it was Maziya who continued to call the shots and they finally capitalised on their dominance in the 50th minute, with Stewart bringing Tana's pass under control before finding the net with the aid of a deflection from around 15 yards. (ANI)