Chinese tennis star Peng Shuai on Sunday said she was safe in Beijing during a video conference with the International Olympic Committee (IOC) chief, the organisation said, amid international concerns about her well being. 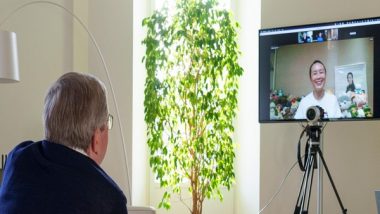 Lausanne, November 22: Chinese tennis star Peng Shuai on Sunday said she was safe in Beijing during a video conference with the International Olympic Committee (IOC) chief, the organisation said, amid international concerns about her well being.

At the beginning of the 30-minute call, Peng Shuai thanked the IOC for its concern about her well-being. "She (Peng Shuai) explained that she is safe and well, living at her home in Beijing, but would like to have her privacy respected at this time. That is why she prefers to spend her time with friends and family right now. Nevertheless, she will continue to be involved in tennis, the sport she loves so much," IOC said in a statement. Also Read | Inter vs Napoli, Serie A 2021-22 Free Live Streaming Online & Match Time in India: How To Watch Italian League Match Live Telecast on TV & Football Score Updates in IST?.

Emma Terho said that she was relieved to see that Peng Shuai was doing fine, which was IOC's main concern. "She appeared to be relaxed. I offered her our support and to stay in touch at any time of her convenience, which she obviously appreciated," she said.

At the end of the call, IOC President Bach invited Peng Shuai for a dinner once he arrives in Beijing next January, which she gladly accepted, and the two agreed to include Emma Terho and Li Lingwei, according to the IOC statement.

The tennis star has disappeared from the public eye after publishing on November 2 a statement on a Chinese social media platform, accusing the Chinese former vice-premier, 75-year-old Zhang Gaoli, of sexually assaulting her.

The post was immediately deleted, Peng's accounts were removed from the Chinese social networks and the athlete stopped communicating, sparking concerns for her safety. On Sunday, Peng finally appeared in public for the first time in several weeks at the opening ceremony of a teenager tennis match final in Beijing.