Earlier, they had lost semi-final clashes of the Carabao Cup against Manchester City and the FA Cup against Chelsea. 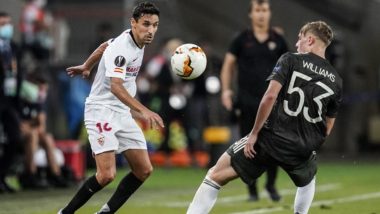 Cologne, August 17: Sevilla stunned Manchester United 2-1 on Sunday (local time) to progress to the finals of the Europa League. In the semi-final clash played at Cologne, United struck first, but Sevilla managed to come back from behind to register a remarkable win.

In the match between United and Sevilla, Bruno Fernandes opened the scoring in the ninth minute as he registered a goal for United after being awarded a penalty. However, Sevilla got the equaliser in the first half, as Suso registered the goal in the 26th minute of the match.

The next goal for Sevilla came in the second half as Luuk de Jong scored for the side, giving them a 2-1 lead with just 12 minutes left in the match.

Sevilla managed to hang on, and the side went away with a comprehensive win. Now, Sevilla will take on the winners of the match between Inter Milan and Shakhtar Donetsk in the finals of the tournament on Friday, August 21.