Get latest articles and stories on Sports at LatestLY. Jason Holder's fifer and Akeal Hosein's four-wicket haul helped West Indies defeat England by 17 runs in the fifth and final T20I here at the Kensington Oval on Monday. 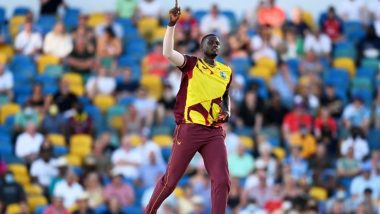 Chasing 180, only James Vince got going for England with the bat as he played a 55-run knock from 35 balls. Sam Billings also chipped in with a 41-run inning, but it did not prove enough as West Indies kept on taking wickets at regular intervals. Holder and Hosein were the standout performers and the duo ensured that the hosts end up winning the series.

Earlier, Kieron Pollard and Rovman Powell played unbeaten knocks of 41 and 35 to help West Indies post 179/4 in the allotted twenty overs. For England, Adil Rashid and Liam Livingstone returned with two wickets each. Herschelle Gibbs’ Request to Get Verified on Twitter Turned Down, Former South African Cricketer Sees Funny Side of It.