Sports News | Ind Vs Eng: Mayank Agarwal Ruled out of First Test Due to Concussion

The Board of Control for Cricket in India (BCCI) on Monday informed that opening batsman Mayank Agarwal has been ruled of the first Test against England. 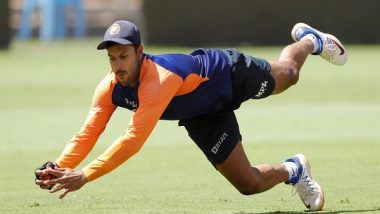 Nottingham [UK], August 2 (ANI): The Board of Control for Cricket in India (BCCI) on Monday informed that opening batsman Mayank Agarwal has been ruled of the first Test against England.

"Opening batsman Mayank Agarwal was hit on the helmet while batting during India's nets session at Trent Bridge in Nottingham on Monday," BCCI said in a statement.

"The BCCI Medical Team assessed him, and a concussion test was conducted. He has shown signs of concussion and is ruled out of the opening Test against England," it added.

BCCI also said the 30-year-old batsman is stable and will remain under close medical observation.

Earlier, India Test vice-captain Ajinkya Rahane informed that Mayank got hit on the helmet on Monday during the practice session.

Rahane said that the medical team was currently accessing Mayank's injury and the rest of the players are fit and available for selection for the first Test against England.

"All the 21 guys are fit for the selection for the 1st Test. Mayank Agarwal got hit on the helmet today in the nets and our team is accessing him. All the pacers are available too for the first Test," Rahane said in a virtual press conference on Monday. (ANI)