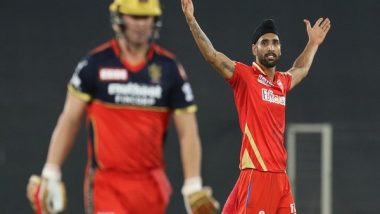 Harpreet picked three key wickets for Punjab Kings as he dismissed Kohli, Maxwell, and de Villiers after shining with the bat. He had played an important cameo alongside skipper Rahul to help the side finish their innings on a high.

"My plan was to bowl wide of the batsmen and allow them to play as the ball was gripping. That's why there was a slip fielder and the cover fielder was a bit up as well. I was aiming to bowl dots but I got a wicket there, so I am blessed," said Harpreet while replying to a query from ANI in a virtual press conference.

Harpreet, who played his first IPL match on Friday, said he wanted to play freely. The all-rounder wasn't disappointed when he was on the bench during Punjab Kings' initial games in the ongoing IPL.

"Pressure is always there, but I have been preparing accordingly. I have played with pressure before also. When you don't perform, obviously there is pressure. This time, I wanted to play with an open mind and give it my best. It wasn't thinking about other stuff, and I didn't put any pressure on myself. Just wanted to go out and perform," said Harpreet.

"Feels nice to represent your home state. When I was on the bench, I had in my mind that I need to give my best when I get a chance and take my team to win," he added. With this win on Friday, Punjab Kings climbed to the fifth spot in the points table. The side will next lock horns with Delhi Capitals on Sunday. (ANI)