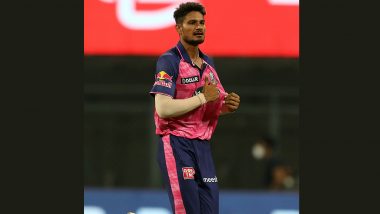 Pune (Maharashtra) [India], April 27 : Rajasthan Royals pacer Kuldeep Sen aims to hit 150 kmph with his bowling. All-rounder Riyan Parag's unbeaten 56 off 31 helped Rajasthan put up a respectable 144/8 on the board in their 20 overs. Later, pacer Kuldeep Sen (4/20) and Ravichandran Ashwin (3/17) strangled the RCB batting with their bowling spells and bundled them out for 115, giving a 29-run win to their side. "150 kmph is on the way. I am somewhere around it right now," said Sen during his post-match discussion with Riyan Parag. Sen revealed that his plan was to hit hard lengths while bowling against Royal Challengers Bangalore at the MCA stadium. IPL 2022: Young Cricketers Garnering Praise from Legends for Impressive Performances.

"During the first 3-4 overs, I was talking to Sanju (Sanju Samson). He told me that it was not easy to score runs on this wicket. Every time I came to bowl, I thought of hitting hard lengths," said the pacer. The pacer termed his wickets of heavy-hitters Faf Du Plessis and Glenn Maxwell as his favourites. About his unbeaten half-century, Parag said he got to spend a lot of time on the wicket after coming out to bat during the second last and last over during his previous matches.

"Rajasthan Royals has backed me. We are practicing really nice. So to do it (score a 50) and help my team win felt good," he added. Coming to the match, RCB bowlers dominated the first innings as wickets kept falling constantly for RR. An unbeaten 56 by Parag and captain Sanju Samson's 27 took the Royals to 144/8 in their 20 overs. Josh Hazelwood emerged as pick of the bowlers for RCB, picking up 2 wickets for 19 runs in his quota of four overs. Chasing 145, RCB had a pathetic start as their star batter Virat Kohli continued having a poor form with the bat and departed after scoring only 9 runs in the second over. He was caught by Riyan Parag on Prasidh Krishna's delivery. Opener and skipper Faf du Plessis was joined by Rajat Patidar and the duo tried to provide some momentum to Bangalore but the former was caught by Jos Buttler, with only 37 runs on the board, in the seventh over. It was followed by Glenn Maxwell's wicket leaving RCB's total at 37/3. IPL 2022: Mahela Jayawardena Reacts to No-Ball Controversy, Wants To See Greater Communication Between TV and On-Field Umpires.

Patidar was joined by Shahbaz Ahmed, who then anchored the innings for some time. Ravichandran Ashwin sent Patidar back to the dugout in the 10th over with the team's total at 58/4. With a total of 30 runs left to win in the last over, it was Kuldeep Sen who put the last nail in the coffin and took Harshal Patel's wicket. Rajasthan won the match by 29 runs. With this win, Rajasthan Royals have moved up to the top of the points table, with six wins in eight matches. Royal Challengers Bangalore, on the other hand, remain at the fifth place, with five wins in nine games.