Get latest articles and stories on Sports at LatestLY. Indian woman pistol ace Manu Bhaker, who won three gold and two silver medals in ISSF Junior World Cup in Suhl, said that India should boycott Commonwealth Games 2022 due to exclusion of shooting. 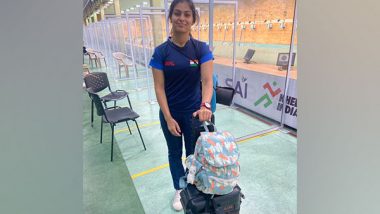 The trio of Manu Bhaker, Esha Singh and Rhythm Sangwan trounced hosts Germany 16-2 in the 25m pistol team final at the ISSF Junior World Cup in Suhl on Tuesday.

Talking about Commonwealth Games this year Bhaker told ANI, "Shooting is not included this year. It will probably not be included in the next year's tournament as well. I think it is wrong to drop the sport. If we want shooting to be included then I think the Indian team should boycott the tournament and this will make a bold statement."

Talking about the Junior World Cup, Bhaker said this tournament was very special for her.

Also Read | Andrew Symonds' Memorial Service To Be Held on May 27.

"I won five medals, two silver and three gold. The tournament was very special for me, as I'll be turning senior shortly. And I am very happy," said Manu Bhaker.

Speaking about PM Modi and how his interaction with athletes motivates them, Bhaker added, "It is motivating for every athlete for meeting the Prime Minister of the country. So this is a proud and honoring moment for every player. I think people's interest is now developing in different sports as well. About 4 or 5 years ago, people did not know that shooting was a sport." (ANI)