Jaipur defenders could only watch and admire the raider charge his way through them. Bengal got their second all-out in the 7th minute to make scores 27-14. 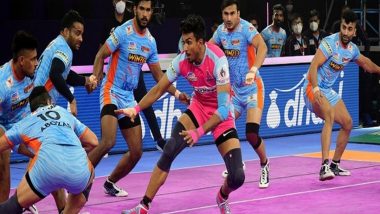 Bengaluru, January 24: Maninder Singh was the star for defending champions Bengal Warriors as they beat Jaipur Pink Panthers 41-22 in Match 75 of the Pro Kabaddi League Season 8 in Bengaluru on Monday.

Captain Maninder scored 13 points and was supported by his entire team in securing a win that will improve their playoff chances. Jaipur's Arjun Deshwal picked up 10 points but received very little support from his defence and offence.

Bengal coach B.C. Ramesh will take a lot of positives from the match, especially the performance of his much-maligned defence. Ran Sindh scored 4 points while Vishal Mane scored 2 points along with Abozar Mighani.

The first half was a cagey affair with both teams matching each other blow for blow. Jaipur were without the services of Deepak Hooda which meant more responsibilities on Arjun Deshwal in the raiding department. The youngster picked points, targeting cover defender Vishal Mane in the Warriors defence, but didn't get ample support from his teammates.

At the other end, Bengal's Maninder Singh couldn't produce his usual magic either as Jaipur defenders took a cautious approach. In fact, it was the secondary raiders who excelled in the first half for the Warriors. Sukesh Hegde and Anand V contributed with important raid points.

Maninder Singh did however make a late impact and clinched a 2-point raid in the final minute of the half to shift the balance to Bengal. A last-minute tackle by Vishal Mane ensured the scores were 14-11 in favour of Bengal at the interval.

Kabaddi is a game of momentum and Bengal certainly had it with them early in the second half. Maninder Singh's 2-point raid (+2 for all-out) took out all the Jaipur men on the mat in the first minute after the restart. He then followed it with a 3-point Super Raid in the 3rd minute and secured his Super 10 by the 6th.

Jaipur defenders could only watch and admire the raider charge his way through them. Bengal got their second all-out in the 7th minute to make scores 27-14.

Even the usually reliable defenders Sahul Kumar and Sandeep Dhull struggled as Mohammad Nabibakhsh inflicted another all-out with 3 minutes on the clock. The Warriors had a 20-point lead and even Arjun Deshwal's Super 10 wasn't enough to help Jaipur make a comeback