Get latest articles and stories on Sports at LatestLY. Top-ranked Indian tennis player Ramkumar Ramanathan was on Thursday awarded a wildcard into the singles main draw of the much-awaited 2022 Tata Open Maharashtra to be held at the Balewadi Stadium in Pune from January 31 to February 6. 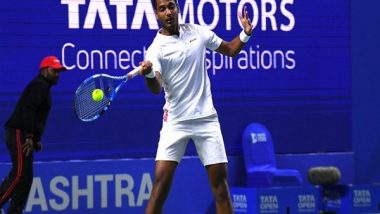 Pune (Maharashtra) [India], January 27 (ANI): Top-ranked Indian tennis player Ramkumar Ramanathan was on Thursday awarded a wildcard into the singles main draw of the much-awaited 2022 Tata Open Maharashtra to be held at the Balewadi Stadium in Pune from January 31 to February 6.

Ramkumar had won his maiden ATP Challenger title in Manama, Bahrain in November last year and regained his position in the Top-200.

In 2017, the lanky Indian had upstaged then World No. 8 Dominic Thiem in straight sets during his first meeting with a Top-10 player.

"I'm extremely happy that tournament organisers are helping me to get into the main draw with a wildcard. The field is quite tough with a lot of good players and it's not going to be easy but I'm going to give my best efforts and hope to have a good run. It was very challenging not to have Tata Open Maharashtra and other tournaments in India last year," said Ramkumar, who will arrive in the city on Friday.

"These events are good for Indians. Missing one year of Tata Open Maharashtra didn't feel that good but I'm happy that it came back now. I'm really looking forward to it," he added.

With this wildcard, the 27-year-old from Chennai has joined compatriot Yuki Bhambri in the main draw.

The Tata Open Maharashtra, one of the country's oldest sporting events, consists of a strong line-up this year with top names from the tennis world fighting it out for the prestigious title, including World No. 15 Aslan Karatsev, teenage sensation Lorenzo Musetti and defending champion Jiri Vesely among seven Top-100 players.

"It's always great to see Indians starting directly in the main draw and we are happy to give the first wildcard to Ramkumar. He has been doing well recently and is a popular face in the tournament," said Prashant Sutar, Tournament Director of Tata Open Maharashtra. "It's our commitment at this tournament to promote Indians and provide them with a platform. We have witnessed some good performances from our players in the past editions and hope the trend continues this year as well," he added.

Apart from singles, Ramkumar will also be a part of the doubles main draw with veteran Rohan Bopanna in a week-long fourth edition of the event. (ANI)