Rashid Khan Creates Record for Bowling Most Overs in a Test in 21st Century, Achieves Feat During Afghanistan vs Zimbabwe 2nd Test 2021 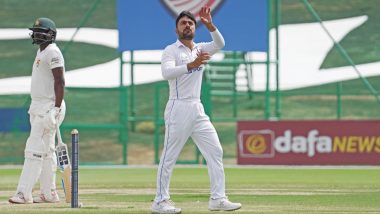 Dubai [UAE], March 14: Afghanistan spinner Rashid Khan on Sunday created the record for bowling the most number of overs in a single Test in the 21st century. The spinner bowled a total of 99.2 overs in the ongoing second Test between Zimbabwe and Afghanistan at the Sheikh Zayed Cricket Stadium in Abu Dhabi. This is the most number of overs bowled by a bowler in a Test since 1998. In 1998, Muralitharan had bowled 113.5 overs vs England at The Oval.

Zimbabwe was following on in the second innings and the side was reduced to 142/7 but Sean Williams and Donald Tiripano formed a 187-run stand for the eighth wicket. Tiripano missed out on a century as he was dismissed for 95 while Sean Williams remained unbeaten on 151.