India women's hockey team goalkeeper Savita Punia stated that the team was hoping to get a match against Australia in the quarter-finals as the Women in Blue have played against them several times over the years. 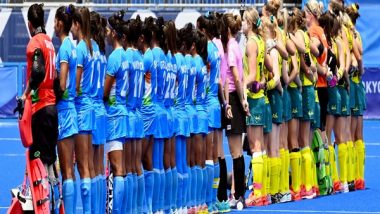 Tokyo [Japan], August 2 (ANI): India women's hockey team goalkeeper Savita Punia stated that the team was hoping to get a match against Australia in the quarter-finals as the Women in Blue have played against them several times over the years.

The Indian women's hockey team scripted history on Monday here at Oi Hockey Stadium -- North Pitch -- as they qualified for the semi-finals of the Olympics for the very first time after defeating Australia 1-0.

"We were thinking that in quarter-final (if) we get Australia as we have played many matches with them and we know that we can play our game in front of them. They give us space and our team was able to take advantage of those things today and as a team, we played sixty minutes on the field," Savita Punia told reporters after the match.

"Against South Africa, we got the score but our performance was not that good. And we planned that we have to defend well even the one-goal lead. I was disappointed with the last match but I kept my calm today. In the last two-three minutes, there was a lot of pressure but we endured it mentally."

Talking about men's team also getting into semis. She said, "It was a very positive sign that the men's team reached the semis. We thought that we should stay along with them."

India's lone goal scorer in the victory over Aussies, Gurjit Kaur also reflected on how the team gave it all in the match. "It was a goal of the team, not just me," Gurjit said. "It was a belief in ourselves and we deserve to be in the semis with our practice and work. We had huge pressure on ourselves in last minutes but we kept calm." (ANI)