Get latest articles and stories on Sports at LatestLY. Tottenham Hotspur FC on Friday announced that goalkeeper Hugo Lloris has signed a new two-and-a-half-year contract with the club, which will run until 2024. 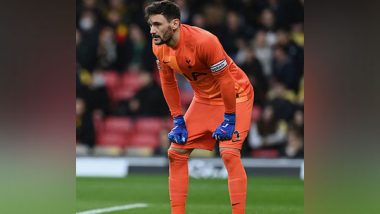 London [UK], January 21 (ANI): Tottenham Hotspur FC on Friday announced that goalkeeper Hugo Lloris has signed a new two-and-a-half-year contract with the club, which will run until 2024.

Captain of the Premier League club, Hugo, 35, has racked up 395 appearances since his arrival from Lyon in August 2012. Already 14th in Spurs' all-time appearance list, he will soon become only the 12th player to make 400-plus appearances for us in all competitions.

He is also the captain of France and has helped his team in lifting the World Cup and UEFA Nations League trophy.

Outstanding since returning from a dislocated elbow suffered in October 2019, Hugo is ever-present in the Premier League this season, and on a run of 67 successive starts in the league going back to the 1-1 draw at Burnley in March 2020.

During that time, he's written his name in club record books by becoming the first player to make 300 appearances for Spurs in the Premier League, surpassing Darren Anderton's long-standing record mark of 299 when he led the team out at Wolves on August 22. He's now up to 317. Meanwhile, Hugo is also level with legendary former captain Steve Perryman on 64 appearances for Spurs in European competition, second only behind team-mate Harry Kane (68).

Hugo is also the first goalkeeper to keep 100 clean sheets for Tottenham in the Premier League, now up to 112, one of only 16 goalkeepers to reach a century in the history of the competition.

Captain since 2014, Hugo has led the team out in three cup finals, including the Champions League Final in 2019. He played a huge role in Spurs qualification for the Champions League in 2015/16 and a record 2016/17 campaign, where the team finished second in the Premier League with a club-high 86 points and conceded a club record low of 26 goals in a league season. (ANI)