Virat Kohli Will Always Be A Leader in Our Group, His Contribution is Immense, Says Jasprit Bumrah

He brings a lot of energy to the side. He will always be a leader in the group and his contribution has always been immense," said Bumrah while replying to ANI query during a virtual press conference. 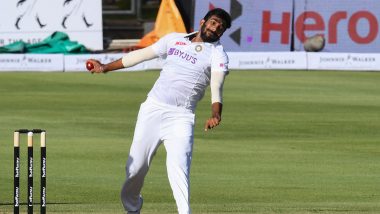 "See, I am not here to give a judgment on Virat's decision to leave Test captaincy. It is a personal decision, we respect his decision. He knows how his body is reacting and what frame of mind he is in. I respect that, it has been an immense pleasure to play under Virat Kohli, I made my Test debut under him.

He brings a lot of energy to the side. He will always be a leader in the group and his contribution has always been immense," said Bumrah while replying to ANI query during a virtual press conference. Sourav Ganguly Reacts to Virat Kohli Quitting Test Captaincy, Says 'His Decision is Personal'.

Last year, Kohli had stepped down as the T20I captain and then he was removed as the ODI skipper after the selectors wanted to have just one captain for the white-ball formats.

"Virat has been the leader of our team, he is energy-driven and he has brought a lot of change to Indian cricket. Everybody got fitter in the team, his contribution has been immense. He is a very important player in the group, his assistance, and knowledge of the game would always be used by the team. He will add inputs and suggestions, we all look up to him," said Bumrah who will be the vice-captain of the India ODI team for the series against South Africa. Anushka Sharma Is Proud of Hubby Virat Kohli’s Growth as She Recalls How His Journey Began in 2014, Calls Him ‘Limitless’ (View Post).

"See, I cannot speak for everyone, but for me, I can say it does not make that of a difference. We all are here to help in whatever way we can, and that is how everyone is responding to the changes. We understand how the process is going, change is the only constant. I do not think anybody is facing a problem or is in a weird space with the change that is taking place. Everyone in the team is quite positive and eager to contribute," he added. India and South Africa will lock horns in a three-match ODI series, with the first match set to be played on Wednesday in Paarl.