India vs New Zealand WTC 2021 Final: World Test Championship Final to Be Played at Ageas Bowl in Southampton From June 18 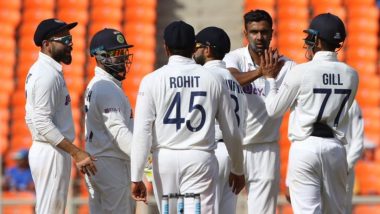 Team India on Saturday roared into the final of the inaugural edition of the WTC following an emphatic 3-1 series win over England. Virat Kohli's men finished as the number one team with 72.2 percentage points in the WTC points table, the factor that determined the final placings rather than total points won, following a change to the points system owing to the Covid-19 disruption. When is WTC Final, India vs New Zealand? Get World Test Championship 2021 Schedule and Venue Details.

"That victory against England means India finish the league phase of the inaugural ICC World Test Championship with a fine view from the top of the table," read a tweet on the official Twitter handle of the International Cricket Council.

After reaching the final, India off-spinner Ravichandran Ashwin said that a best of three final would have been nicer, but the senior pro assured that the side will give its best shot in the summit clash.

"For people like me, Pujara (Cheteshwar), Rahane (Ajinkya), and Ishant (Sharma), who did not play the 2019 World Cup, this is literally the World Cup. I also saw Ishant speaking about it. I am happy for every member for making it to the finals. I am sure we can get a positive result if we adapt quickly because we just have one match as the final. It would have been nicer if we had three, but we just have one, we have to live with that and we will try to give our best shot," said Ashwin in a video posted on the official website of the BCCI. ICC World Test Championship 2019–21 Points Table Final Update: India & New Zealand Qualify for Final, to Lock Horns in the Summit Clash at Lord’s.

Talking about the WTC final, pacer Ishant Sharma had said: "Feeling great to be a part of this team. Really happy, the kind of effort we have put in 2-2.5 years for this championship, it is a tremendous achievement that we have made it to the final. Actually, I am looked forward to the final." In November last year, the ICC had confirmed that the WTC points system would be amended due to the COVID-19 pandemic.