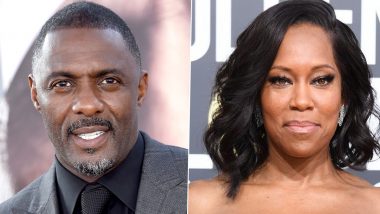 Netflix has halted the shooting of the upcoming film 'The Harder They Fall' after a member of the production team tested positive for COVID-19, according to Variety. The film starring Idris Elba and Regina King, was roughly five weeks into shooting in New Mexico. An insider has confirmed to Variety that none of the primary cast members have tested positive for the virus. The production is expected to restart next week, however, it is still unclear when the shooting will resume. Jurassic World: Dominion Halts Production After Few Crew Members Test COVID-19 Positive on Sets (Read Tweet)

There has not been any official announcement if the cast or crew member who tested positive was symptomatic. The filming stopped late Thursday and remained shut down on Friday. A spokesperson for Netflix declined to comment for this report. Elba was one of the first celebrities to take the announcement of coronavirus diagnosis to the public. In March, Elba announced that he and his wife, Sabrina Dhowre Elba, had been diagnosed with COVID-19. The Batman Shoot Temporarily Halted After Robert Pattinson Reportedly Tests Positive For COVID-19

The industry has committed a great deal of resources in figuring out ways to safely resume production during the pandemic. 'The Harder They Fall' is the first project to go into production in New Mexico since COVID-19 cases started to rise last spring, as per Variety. The film also features Jonathan Majors, Zazie Beetz, LaKeith Stanfield, and Delroy Lindo. Jeymes Samuel is helming the film from a script he co-wrote with Boaz Yakin.