Viral: Sarah Silverman To Feature Opposite Blair Underwood in an Independent Psychological-Thriller Film

According to The Hollywood Reporter, City of Angels star Underwood has also directed and produced the film. Viral is also produced by McClean, Daniel Cypress, John Kalafatis, Joanna Kalafatis and Andreas Ignatiou of York Films. 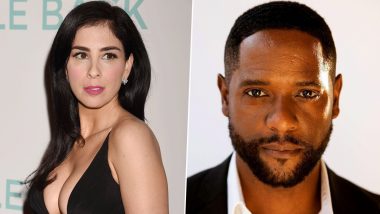 Actor-comedian Sarah Silverman has joined Blair Underwood on the independent psychological thriller Viral. According to The Hollywood Reporter, City of Angels star Underwood has also directed and produced the film. Silverman will play Emilia, the girlfriend to Andrew (Underwood), who falls into paranoia after his wife goes missing. Andrew tries to escape a self-destructive cycle via Emilia, a victims advocate and self-help blogger who is dealing with her own demons from the past. Sarah Silverman Reveals Comedian Louis CK Masturbated In Front of Her With Her Permission.

Underwood said Silverman, whose film credits include Battle of the Sexes and The Book of Henry, is a "true artist" who thrives in all genres. "Most people know of Sarah Silverman's brilliant comedic performances, but she's a devastatingly raw and authentic dramatic actress as well," the actor-filmmaker said. Paris Hilton Reacts to Sarah Silverman’s Apology After the Comedian Mocked Her During 2007 MTV Movie Awards – WATCH.

Written by Joe McClean of Resident Evil: Vendetta fame, the movie is set to shoot in New York this summer. Viral is also produced by McClean, Daniel Cypress, John Kalafatis, Joanna Kalafatis and Andreas Ignatiou of York Films.Silverman recently wrapped production on the feature Marry Me.