In another new decree on Thursday, the Taliban directed all-female presenters working on all TV channels to cover their faces while presenting programs, TOLOnews tweeted. 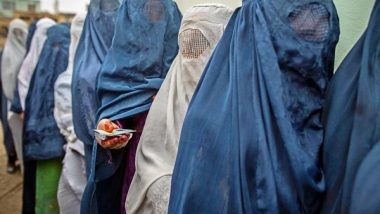 Kabul, May 19: In another new decree on Thursday, the Taliban directed all-female presenters working on all TV channels to cover their faces while presenting programs, TOLOnews tweeted.

Continuing the thread, the ministries of Vice and Virtue and Information and Culture called it a final verdict and said that the order has been issued to all media outlets in Afghanistan. Taliban Bans Women and Girls without Mahram From Entering Coffee Shops in Afghanistan's Herat.

The atrocities of the Taliban against Afghan women have been on an incessant surge since the organization seized power in Afghanistan in August last year, banning young girls and women of humanitarian rights.

Taliban, in its official order earlier, directed female staff members of the UN Assistance Mission in Afghanistan (UNAMA) to wear the hijab at offices and has also curtailed Afghan women from wearing make-up and reproductive rights, ban on education for girls from classes 6 and above being an add on.

Dozens of Afghan women are protesting against the Taliban leader's new order on women wearing the hijab. Unrecognized by most of the international community, the Taliban-led government has committed to disrespecting the human rights and rights of women.

The UN mission in Afghanistan has expressed concern about the announcement, saying that this decision contradicts numerous assurances regarding respect for and protection of all Afghans' human rights, including those of women and girls. The Taliban had warned that if the women disobeyed the order, their parents would be punished and imprisoned.