China Plans To Extend Belt and Road Initiative in Bangladesh

In order to spread its strategic design in the Indian sub-continent, China is moving to enter Bangladeshi infrastructure development through its Belt and Road Initiative (BRI). 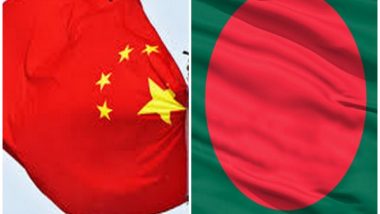 Dhaka, April 8: In order to spread its strategic design in the Indian sub-continent, China is moving to enter Bangladeshi infrastructure development through its Belt and Road Initiative (BRI).

Beijing has proposed a highway network plan for Bangladesh, which would be the guiding document for future investment in the Bangladeshi road sector, reported Bangladesh Live News. Belt and Road Initiative Neither a 'Chinese Plot' Nor 'Post-World War Two Marshall Plan': Xi Jinping.

The plan is reportedly being prepared by a Chinese company based on research of the existing Bangladeshi road network, including emerging challenges.

The Chinese government would provide grant assistance of RMB 7.26 million (USD 1.13 million) for this project from the grant assistance fund stipulated in the Economic and Technical Cooperation Agreement signed by the two sides in 2016, reported Bangladesh Live News.

However, despite China's keenness to make inroads in Bangladeshi infrastructure development and rope in the country in the BRI, no official commitment is learnt to have been made by Dhaka in this regard, reported Bangladesh Live News.