When the traveller was asked why he was in possession of the pills he stated they were for his friends and they are considered over the counter medication in India," the CBP said in a statement. 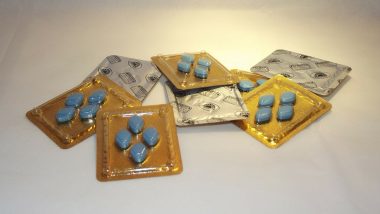 Washington, February 6: An Indian national was held at the Chicago airport for unlawful import of 3,200 pills of viagra worth over USD 96,000, according to an official statement. The passenger, whose identity has not been revealed, had travelled back to the US from India and was caught with the tablets during a baggage scan, the US Customs and Border Protection (CBP) said in a statement on Friday.

The officials said the passenger was held by the authorities after he could not give a satisfactory justification for carrying such high quantity of viagra tablets. Himalayan Viagra, World's Most Expensive Fungus, Listed as 'Vulnerable to Extinction' by IUCN.

"During a baggage exam officers found the passenger was in possession of 3,200 Sildenafil Citrate tablets (100 mg). When the traveller was asked why he was in possession of the pills he stated they were for his friends and they are considered over the counter medication in India," the CBP said in a statement.

“The nine pounds of pills were seized for unlawful importation of mediation. The pills have an estimated manufacturer's suggested retail price (MSRP) of approximately USD 96,608,” CBP said.

CBP said that as a general rule the Food and Drug Administration does not allow the importation of prescription drugs that were purchased outside the US.

"Our inspecting officers have the daunting tasks of inspecting items passengers are trying to bring into the US,” said Shane Campbell, Area Port Director-Chicago.

“Some passengers try to hide some of their items from our officers, which could prove to be dangerous. In this instance, our officers found these pills and prevented them from entering the US and harming our community,” Campbell said.