Afghanistan: Man Sets Himself on Fire Over Financial Stress in Kabul

A man set himself on fire in Dehmazang Square in Afghanistan's Kabul on Monday with the media reports stating that he had been facing financial difficulties. 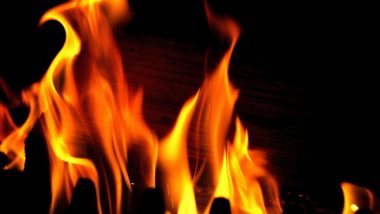 Kabul, April 18: A man set himself on fire in Dehmazang Square in Afghanistan's Kabul on Monday with the media reports stating that he had been facing financial difficulties.

"A man set himself on fire in Dehmazang Square in the west of Kabul on Monday morning. Eyewitnesses said the man was hospitalized after the incident. It is claimed that he was struggling with economic challenges," TOLOnews reported. Afghanistan: Opium Cultivation Ban Can Have Adverse Effects on Afghan Economy, Says Report.

The situation in Afghanistan has worsened since the collapse of the Afghan government and the Taliban's return to power in August last year. According to UN figures, 23 million people in Afghanistan are currently starving and 95 per cent of Afghans do not have enough food to eat three times in 24 hours.

The takeover of Afghanistan by the Taliban caused not only a political crisis in the country but also uncertainty in business and unemployment. The private sectors were "hit hard" as the businesses were halted and put to uncertainty, according to the latest survey conducted by the World Bank, reported Khaama Press.

Due to a shortage in sales, private companies have laid off more than half of their employees on average, rising concern about the unemployment rate in the country.