Finland: Over 50 Protesters Arrested During Rally Against COVID-19 Restrictions in Helsinki, Say Police 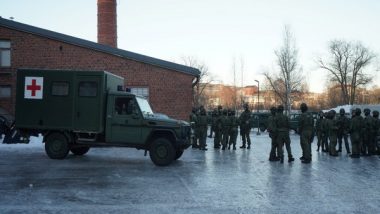 "Police towed dozens of vehicles from the Mannerheimintie street and arrested 55 people. Two arrested are suspected of violent opposition to a police officer," the police said in a statement. Traffic in Helsinki was fully restored in the early hours of Saturday, according to the police. Also Read | Dazzling Scenes from Beijing Winter Olympics 2022 Opening Ceremony.

In mid-January, the Finnish government announced an extension of COVID-19 restrictions by two weeks beyond their deadline at the end of January given elevated occupancy rates in hospitals.