Lashing out at the Deputy Speaker, he said, "He has done unconstitutional thing at the last moment. He broke the Constitution of Pakistan. The no-trust vote had to take place today as per the Constitution." 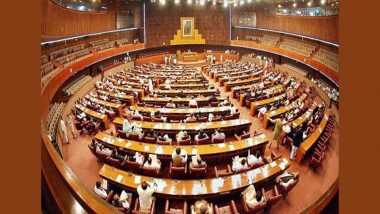 "Government has violated the Constitution by not allowing voting on the no-confidence motion. United Opposition is not leaving Parliament. Our lawyers are on their way to Supreme Court. We call on all institutions to protect, uphold, defend and implement the Constitution of Pakistan," Bilawal tweeted.

Suri, who was chairing today's session, dismissed the no-confidence motion against the Imran Khan-led government, terming it a contradiction of Article 5 of the Constitution. Pakistan Supreme Court Takes Suo Motu Notice of National Assembly’s Dissolution.

"Everyone has seen what happened in Pakistan today. President, Speaker can easily see that the Opposition had a majority against Imran Khan in the no-confidence motion," said Bilawal.

Lashing out at the Deputy Speaker, he said, "He has done unconstitutional thing at the last moment. He broke the Constitution of Pakistan. The no-trust vote had to take place today as per the Constitution."

Announcing the Opposition's decision to stage a dharna, Bilawal said, "We are also in talks with our lawyers, we will go to Supreme Court so that the voting can take place today itself. In the light of the majority being with Opposition, the House cannot be dissolved."

He also lashed at Imran Khan and advised him to stop behaving like a child and running away from fights and appealed to Pakistani citizens to side with the Constitution and believe in democratic values, adding "do not allow puppet or non-democratic person to rob your rights". ‘Pakistan Cabinet Dissolved, but Imran Khan Will Continue As PM’, Says Minister Chaudhry Fawad Hussain.

Meanwhile, Pakistan President Arif Alvi has dissolved the National Assembly on the proposal of Prime Minister Imran Khan on Sunday, with the elections likely to be held in the next 90 days.

This comes after Imran Khan surprised the Opposition to announce in his televised address to the nation that he has advised President Arif Alvi to dissolve all the Assemblies. However, the Supreme Court has taken a suo moto notice of the dissolution of the National Assembly by Alvi on Sunday.