Get latest articles and stories on World at LatestLY. Pakistan Tehreek-e-Insaf leader and former information minister Fawad Chaudhry on Saturday slammed the Shehbaz Sharif government of indulging in revenge politics and said that the US-backed installed government in Pakistan was lodging FIRs against opponents. 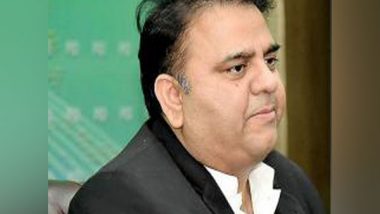 Islamabad [Pakistan], May 29 (ANI): Pakistan Tehreek-e-Insaf leader and former information minister Fawad Chaudhry on Saturday slammed the Shehbaz Sharif government of indulging in revenge politics and said that the US-backed installed government in Pakistan was lodging FIRs against opponents.

Speaking to the media, the PTI leader said, "It has now become the routine of the imported government to lodge false FIRs to put pressure on political leaders."

Fawad Chaudhary's comment came after he was granted bail on Saturday by Islamabad High Court, in a case registered against him for allegedly provoking people against the Shehbaz Sharif government during a rally.

He said that not only in Islamabad but FIRs have also been lodged against PTI leaders and workers in connection with its freedom march, The News reported.

"Over 107 FIRs have been lodged all over the country. Today, there was relief from the court. I am grateful to the chief justice, he always speaks for the rights of the common citizens. The courts are a ray of hope in the oppressive system," Chaudhary said.

The PTI leader alleged that the government machinery was being used with full force to suppress political opponents, The News reported.

"The fake FIRs and pamphlets aim to suppress the voice of the opposition. They are also enacting laws of their choice. From the first day, they made changes in the Federal Investigation Agency (FIA), changed the investigation teams, removed prosecutors and installed people of their own choice and after abolishing the ECL, they are now going to abolish the NAB," he said.

Chaudhary said that the leader of the 'turncoat association' in the National Assembly had been made the leader of the Opposition, as they thought it would provide their actions with a legal status, which was not possible.

He pointed out that Justice (retd) Maqbool Baqar was being appointed as National Accountability Bureau (NAB) chairman but remarked, "I think he is an honest and respectable man and no respectable man will like to be NAB chairman in this way. They have appointed their loyalists as Members of the Election Commission of Pakistan and no one trusts the commission," The News quoted Chaudhary as saying.

He continued, "Because of such personalities in institutions, people had stopped trusting the institutions, wondering how long would it continue? We are seeing it all; the PTI is keeping an eye on all that is happening; we cannot hand over this country to Maryam Nawaz as per the wishes of Zardari and Bilawal. The Sharif and Zardari families are a curse to the country. The PTI will get rid of the mafia," The News reported.

Chaudhry and Ahmed had filed a petition for their protective bail in the IHC on May 25, where Chief Justice Athar Minallah took up their plea yesterday despite it being an off day.

The bail was granted to the brothers against a surety of Rs5,000 each and the petition was disposed of thereafter, Dawn reported.

The case against Chaudhry and Ahmed was registered at Mangla police station in Jhelum along with 150 to 200 others.

The FIR was registered on the grounds the during the PTI's Azadi March rally was against the law and the PTI supporters became violent and started pelting policemen with stones, the report added further, stating that Chaudhry, Ahmed and 150 to 200 unidentified suspects were booked in the case on the complaint of SHO Mangla Cantt Sajid Mehmood.

The city turned into a battleground on Wednesday after the ousted Prime Minister held a long protest march on May 25 against the present government, demanding the dissolution of the National Assembly and to conduct the next general election.

The march was followed by multiple scuffles between the police and PTI marchers after Imran Khan and his convoy entered the city and started marching towards the D-Chowk despite the Supreme Court's order to hold a rally at a ground between the H9 and G9 areas of Islamabad. (ANI)