Get latest articles and stories on World at LatestLY. Pakistan has declared three-day national mourning as a mark of respect for the United Arab Emirate's (UAE) President, Sheikh Khalifa Bin Zayed Al Nahyan, who passed away on Friday. 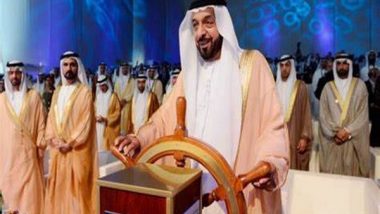 Islamabad [Pakistan], May 14 (ANI): Pakistan has declared three-day national mourning as a mark of respect for the United Arab Emirate's (UAE) President, Sheikh Khalifa Bin Zayed Al Nahyan, who passed away on Friday.

According to a press release issued by the Pakistan Foreign Office, the National Flag of Pakistan will be flown at half-mast during the national mourning, reported The Nation.

Pakistan Foreign Affairs spokesperson, Asim Iftikhar Ahmad, said in a statement that the government and the people have received the news of the "sad demise of the UAE President with a deep sense of sorrow and grief".

In addition, Ahmed also mentioned that with Sheikh Khalifa's death, UAE has lost a visionary leader while the people of Pakistan have lost their sincere friend, reported The Nation.

Further, the spokesperson stated that the late UAE Sheikh Khalifa had played a primary role in the modernization and development of the UAE. Sheikh Khalifa's leadership qualities and vision were important to UAE's rise to prominence as a major economic powerhouse.

Notably, the sterling contributions of the UAE President in humanitarian affairs and also towards promoting peace will be remembered in the pages of history, wrote The Nation.

Meanwhile, the UAE will go into 40 days of mourning, with flags flown at half-mast. All government agencies and federal, local and private entities will suspend work for three days.

Sheikh Khalifa died at the age of 73 after suffering from a long illness. (ANI)