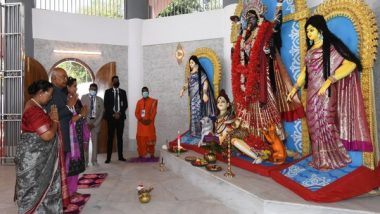 President, who is on a three-day visit to Bangladesh, also interacted with Indian war veterans and Muktijoddhas of Bangladesh.

Also Read | Millipede With 1,306 Legs, Discovered in Australia, is The World's Leggiest Creature.

He also said that President Kovind interacted with Indian community members, friends of India, Muktijoddhas and Indian war veterans in Bangladesh. The visit is of historical significance given the 50th anniversary of the shared sacrifices of the people of the two countries during Bangladesh's struggle for liberation in 1971, the Ministry of External Affairs (MEA) said in a press release on Friday.

The President attended the Victory Day parade in Dhaka as the Guest of Honour. A 122-member tri-service contingent of the Indian Armed Forces also participated on this historic occasion. In remembrance of the bravery and the supreme sacrifices made by the Indian Armed Forces during the 1971 Liberation War of Bangladesh, Wing Commander T. Asha Jyotiramai performed a para jump unfurling the flag of the Indian tri-services along with the paratroopers from the Bangladesh Armed Forces at the Victory Parade, the release added.