Russia Urges US to Abandon 'Futile Policy' of Blockade, Sanctions

The diplomatic mission's comment was timed to the announcement of a new round of high-level dialogue between the United States and Cuba on migration on April 21. The Russian Embassy welcomed the step. 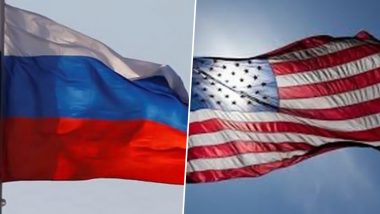 Washington, April 20: Russia urged the United States to abandon its "futile policy" of blockade and sanctions in foreign policy, the Russian Embassy in Washington said on Tuesday (local time). The diplomatic mission's comment was timed to the announcement of a new round of high-level dialogue between the United States and Cuba on migration on April 21. The Russian Embassy welcomed the step.

"Dialogue is always better than its absence. It is high time for the #US to abandon the futile policy of blockade and sanctions in foreign affairs," the embassy tweeted. Earlier, there were reports that the US is looking at designating Russia as a state sponsor of terrorism. Russia-Ukraine War: Russia Seeks To End US-Dominated World Order, Says Russian Foreign Minister Sergey Lavrov.

"We're taking a close look at the facts. We're taking a close look at the law," US State Department spokesperson Ned Price said during an interview with CNN on Monday. Ukraine's Volodymyr Zelenskyy has urged US President Joe Biden to impose the designation on Russia that would impose some of the most significant sanctions at the Biden administration's disposal, Sputnik News Agency said citing media reports.

Notably, US President Joe Biden has no plans to visit Kyiv to meet with Ukrainian President Volodymyr Zelenskyy, as per White House. The US earlier had announced to provide Ukraine with an additional 800 million US dollars' worth of military aid including heavy artillery as Washington anticipated a "wider assault" by Russia in eastern Ukraine.Meanwhile, President Joe Biden will hold a video call with US allies and partners on Tuesday to discuss providing support for Ukraine and restrictions on Russia, as per White House. Russia-Ukraine War: Estonia Bans Russian Ships from Entering Country's Ports.

"The President convenes a secure video call with allies and partners to discuss our continued support for Ukraine and efforts to hold Russia accountable as part of our close coordination," the White House said in a press release. Earlier in the day, the US Treasury Department said the next phase of US sanctions would target Russia's military-industrial complex, according to reports.