The Island nation is facing an unprecedented medicines supply shortage while people have hit the street against the government to protest the ongoing economic crisis. 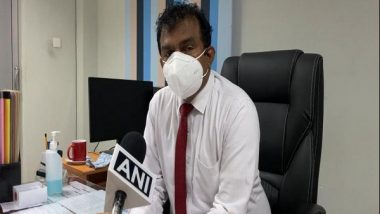 The Island nation is facing an unprecedented medicines supply shortage while people have hit the street against the government to protest the ongoing economic crisis.

"Most of our drugs are coming from India under Indian credit line, and more supply will come to us in near future. It is a great help for us. I thank India for the support," Dr Dammika, Director of National Eye Hospital Colombo said. Sri Lanka Economic Crisis: Reports Claiming Mahinda Rajapaksa Has Resigned Are False, Prime Minister's Office Clarifies.

India is providing medicines while fuel has also been provided by India to Sri Lanka under USD 500 million line of credit. "We have medical stock in our hospital for this month only and we are getting supply from the Ministry of health while some of the hospitals are facing the shortage of drugs," he told ANI.

Sri Lanka is presently facing a foreign exchange shortage which has led to a food, fuel, power and gas shortage and has sought the assistance of friendly countries for economic assistance. Sri Lanka's currency has been also devalued by almost SLR 90 against the US dollar since March 8.

The economy of the island country that has been in a free-fall since the onset of the COVID pandemic is now in the throes of a spiralling crisis, with shortages of medicines and food and long power cuts.

Several hotels located in Colombo said they have suffered huge losses due to ongoing mass protests in the city. The country's tourism sector, one of the major contributors to its economy, which was slowly reviving after the COVID pandemic, has now been hit hard.

Meanwhile, Sri Lanka President Gotabaya Rajapaksa has revoked the State of Emergency imposed in the country to ensure "public security and maintenance of public order."

This decision was announced after an emergency general committee meeting of the country's Government Medical Officers' Association (GMOA) to discuss the imposition of the emergency law and the severe drug shortage, the Daily Mirror reported.

The Sri Lankan rupee is fast depreciating against the dollar and foreign debt is mounting. The Sri Lankan government's income has also taken a big hit due to a drop in tourism that has given rise to gas and fuel shortages, leading to massive power cuts.

As New Delhi is providing financial assistance to Colombo, India has announced another USD 1 billion as credit to Sri Lanka to help shore up the sinking economy of the island nation. The USD 1 billion line of credit to Colombo will help in keeping their food prices and fuel costs under check.

Last month Sri Lankan President Gotabaya Rajapaksa met Prime Minister Narendra Modi and briefed him on "initiatives being taken by both countries to increase bilateral economic cooperation, and conveyed his thanks for the support extended by India for the Sri Lankan economy."

PM Modi has conveyed to Sri Lankan Finance Minister Basil Rajapaksa, who has visited India twice in recent months, that the latter would always stand with the island nation as it occupies a central role in New Delhi's "neighbourhood first policy."

In February, New Delhi provided a short-term loan of USD 500 million to Colombo for the purchase of petroleum products through the Ministry of Energy and the Ceylon Petroleum Corporation on behalf of the Government of Sri Lanka. In November 2021, India had given 100 tonnes of nano nitrogen liquid fertilisers to Sri Lanka as their government stopped the import of chemical fertilisers.