The Taliban on Thursday said it control approximately 90 per cent of Afghanistan's border with neighbouring countries. 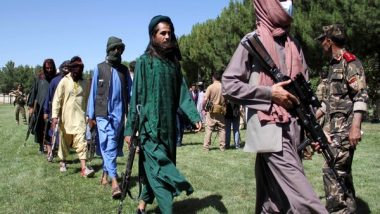 Kabul [Afghanistan], July 22 (ANI): The Taliban on Thursday said it control approximately 90 per cent of Afghanistan's border with neighbouring countries.

In the past few weeks, Afghanistan has witnessed a surge in violence as the Taliban has intensified its offensive against civilians and Afghan security forces with the complete pullback of foreign forces just a few weeks away.

The Taliban now control about half of the 419 district centres in Afghanistan, and while they have yet to capture any of the country's 34 provincial capitals, said Gen. Mark Milley, chairman of the Joint Chiefs of Staff

As the Taliban seize more territory, the Afghan security forces are consolidating their positions to protect key population centres, including Kabul, he said.

The spokesperson said that the Taliban will not let the terrorist organisation ISIS become active in Afghanistan.

Mujahid claimed that there are no terrorists from Central Asia or China's Uyghur region in Taliban-controlled areas, reported Sputnik.

This comes a day after US Defence Secretary Lloyd Austin said the focus of US military efforts in Afghanistan will be countering terrorist threats, not the Taliban, following the withdrawal.

Afghan President Ashraf Ghani on Wednesday said that the Taliban has deep ties with Al-Qaeda and Lashkar-e-Taiba and Jaish-e-Mohammed, adding that the terror group wants Afghanistan "to become a haven for insurgents".

Ghani made the remarks at Special Operations Command Center in Kabul. "The government will never allow this to happen," President Ghani said.