Tesla in India: Elon Musk Says ‘No Plant Where Sell of Imported Cars Not Allowed’

Hinting that Tesla will not put a manufacturing plant in India the carmaker's chief executive officer (CEO) Elon Musk said on Friday tweeted that until the company is first allowed to sell and service imported cars in the South Asian country there will be no setting up of the bases. 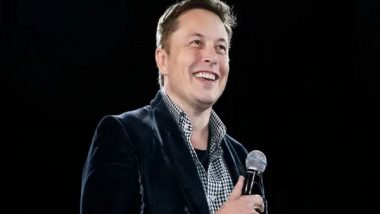 Texas, May 28: Hinting that Tesla will not put a manufacturing plant in India the carmaker's chief executive officer (CEO) Elon Musk said on Friday tweeted that until the company is first allowed to sell and service imported cars in the South Asian country there will be no setting up of the bases.

These comments suggest that the standstill between India and Telsa in regards to setting up the manufacturing plant in the country continues.

Earlier in April, highlighting the conducive environment for automobile manufacturing in India, Union Minister for Road Transport and Highways Nitin Gadkari said that Elon Musk is welcome to manufacture e-vehicles in India, but in case the Tesla owner desires to build in China and sell here, it cannot be a "good proposition".

Gadkari made the remarks while speaking at a private event in Delhi answering a question on Tesla's concerns on "high duties" in India. "It is a very easy alternative; if Elon Musk is ready to manufacture a Tesla in India, there is no problem. We have got all competencies, the vendors are available. We have got all types of technology and because of that, he can reduce the cost," Gadkari said.

Inviting Tesla to start manufacturing in India, the Union Minister highlighted that India is a huge market, and infrastructure like ports are available to enable exports.

"He is welcome in India. We don't have any problem, but, suppose, he wants to manufacture in China and sell in India, it cannot be a good proposition for India. Our request to him is, come to India and manufacture here," Gadkari said.

Citing the tremendous growth in the e-vehicles sector in India over the last few years, Gadkari further said that "my suggestion to Elon Musk is, in India, he will get a good market and Indian market is very huge. It is a win-win situation for both."

He added that India has all the quality vendors and automobile spare parts that are available in China and that "it can be easier for him to make here in India and sell in India. He will get good profits from that, and good economics is there. I will request him to come to India and start manufacturing here."

Echoing similar sentiments, the Minister of State for Heavy Industries Krishan Pal Gurjar earlier in February told the Lok Sabha during Question Hour that there cannot be a situation where the market is in India but jobs are created in China.

In 2020, Musk announced plans to open the production of Tesla electric vehicles in India. A subsidiary of Tesla, India Motors And Energy Private Limited was established in Bengaluru in southwest India. Musk said he was ready to build a Tesla factory in India if the country reduces the cost of importing electric vehicles.

Elon Musk, an American entrepreneur and the founder of Tesla, said that the electric vehicle company continues to face "a lot of challenges" with the Indian government regarding the setting up of car production in India.

Earlier in January, a Twitter user posted a tweet asking Musk whether there was any further update on Tesla's manufacturing launch in India and saying the vehicles "deserve to be in every corner of the world." "Still working through a lot of challenges with the government, " Musk answered on Twitter.