Donald Trump Returns to Campaign Trail in Florida, Says He Feels 'Powerful' and Wants to 'Kiss Everyone'

Get latest articles and stories on World at LatestLY. Less than two weeks after he tested positive for coronavirus, an exuberant US President Donald Trump made a comeback to the campaign trail with a rally in Sanford, Florida stating that he felt "so powerful" that he wanted to "kiss everyone" in the audience. 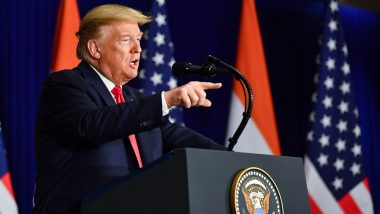 Florida, October 13: Less than two weeks after he tested positive for coronavirus, an exuberant US President Donald Trump made a comeback to the campaign trail with a rally in Sanford, Florida stating that he felt "so powerful" that he wanted to "kiss everyone" in the audience.

Walking off Air Force One at the Orlando Sanford International Airport onto a stage, Trump played down the coronavirus and said, "22 days from now we're going to win this state, we're going to win four more years at the White House." US Presidential Elections 2020: Donald Trump Says He Wouldn't be US President if Barack Obama And Joe Biden Had Done Job 'Properly'.

The White House earlier in the day had released a statement by Trump's physician saying the president had tested negative for COVID-19 on consecutive days.

At the rally, the President said that he was in great shape and that he was not an "old person", labelling the people who criticise this statement as "sickest of them all". "I am not an old person--I am very young and I am in such perfect shape. I am in such great shape that and they said, 'Donald Trump misrepresented today again.

He said he was in great shape, but he was young. "These people are the sickest of them all," he added. In his address, he said that the United States has been teaching China as "they have never been taught before".

Trump also slammed his counterpart, Joe Biden, for calling him a xenophobic for "locking down" China, "which was a terrible thing he called me." "When I locked down China, which was in January, ultimately admitted that I am right. Nobody acted as fast as I did. We saved millions of lives. We are at 210,000 deaths--we shouldn't be at one. It is China's fault; they allowed this to happen, they allowed this to escape," he added.

Trump again reiterated the fact that his administration would be delivering a vaccine for Covid-19 adding that 'no country' has recovered the way the US has. "Under my administration, we are delivering a safe vaccine and a rapid recovery like nobody can. No country in the world has recovered the way we have recovered -- economically or otherwise," he said. Trump is set to address events in Pennsylvania, Iowa, North Carolina and Wisconsin this week.