US President Joe Biden and Japan Prime Minister Yoshihide Suga, in their first in-person bilateral meeting at the White House, discussed the increasing Chinese influence over the peace and prosperity of the Indo-Pacific and ways to strengthen the QUAD, comprising of India and Australia as the other two nations in the grouping. 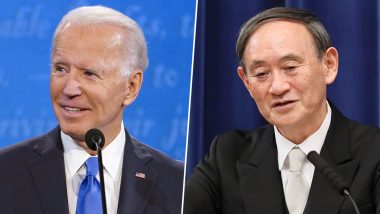 Washington, Apr 17: US President Joe Biden and Japan Prime Minister Yoshihide Suga, in their first in-person bilateral meeting at the White House, discussed the increasing Chinese influence over the peace and prosperity of the Indo-Pacific and ways to strengthen the QUAD, comprising of India and Australia as the other two nations in the grouping.

Other issues like climate change, fight against coronavirus pandemic and North Korea did appear in their talks on Friday, which was the first for Biden with a foreign leader as the president of the United States.

"Our alliance has served its role as the foundation of peace and stability for the Indo-Pacific region and the world. In light of the current regional situation and the severe security environment, the importance of our alliance has reached new heights," Suga told reporters at a White House news conference with Biden. China to Step Up Global Influence Campaign Amid Rising Discontent: Report.

In addition to the bilateral relationship, Suga said they discussed the free and open Indo-Pacific.

“We agreed that while Japan and the US will take the lead to promote the vision through concrete efforts. We will also cooperate with other countries and regions, including the ASEAN, Australia, and India,” he said.

“We also had serious talks on China's influence over the peace and prosperity of the Indo-Pacific and the world at large. We agreed to oppose any attempts to change the status quo by force or coercion in the East and South China Seas and intimidation of others in the region,” Suga said.

Beijing claims almost all of the 1.3 million square mile South China Sea as its sovereign territory. China has been building military bases on artificial islands in the region also claimed by Brunei, Malaysia, the Philippines, Taiwan and Vietnam.

Beijing has impeded commercial activity like fishing or mineral exploration by countries like Vietnam and the Philippines, claiming that the ownership of territory belonged to China for hundreds of years.

Suga and Biden agreed on the necessity for each of them to engage in frank dialogue with China and in doing so to pursue stability of international relations while upholding universal values, said the Japanese Prime Minister.

Affirmed by their ironclad support for US-Japanese alliance and for their shared security, Biden told reporters they committed to working together to take on the challenges from China and on issues like the East China Sea, the South China Sea, as well as North Korea to ensure a future of a free and open Indo-Pacific.

"Japan and the United States are two strong democracies in the region and we're committed to defending, advancing our shared values, including human rights, and the rule of law," he said.

"We're going to work together to prove that democracies can still compete and win in the 21st century. We can deliver for our people in the face of a rapidly changing world. So today, we're announcing a new competitive and reliance partnership corps between Japan and the United States that will enhance our ability, enhance our ability to meet the pressing challenges of our time, together beat those challenges,” Biden said.

“Top of our agenda is, of course, getting the pandemic under control, and helping our friends and neighbours throughout the Indo-Pacific region to recover. Earlier this year, we together with India and Australia, launched the landmark Quad Vaccine Partnership to expand the manufacturing of COVID-19 vaccines and assist countries throughout the region with vaccination efforts,” he said.

Biden said they agreed to enhance their support for global vaccination efforts through the ACT accelerator and COVID-19 facility.

On March 12, leaders of the four Quad countries -- Prime Minister Narendra Modi, his Australian counterpart Scott Morrison, US President Biden and Japanese Prime Minister Suga -- had held their first virtual summit under the framework of the Quadrilateral coalition.

Japan and the United States, he said, are both deeply invested in innovation and looking to the future. That includes making sure we invest in and protect the technologies that will maintain and sharpen their competitive edge, he said.

“Thirdly, our nations are committed to taking aggressive action to meet the threats of climate change,” he said adding that Japan and the United States are both committed to achieving net-zero emissions by 2050.