Decked up in red-coloured finery, several girls under the age of seven lined up to be worshipped turn by turn at the Basantapur Durbar Square in Kathmandu for the 'Kumari Puja', a tradition that worships pre-pubescent girls as manifestations of goddess Taleju, the Nepalese name for Goddess Durga. 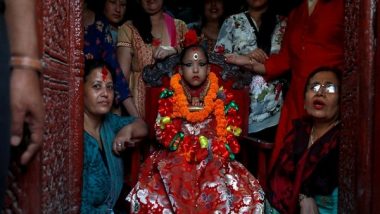 Kathmandu, September 19: Decked up in red-coloured finery, several girls under the age of seven lined up to be worshipped turn by turn at the Basantapur Durbar Square in Kathmandu for the 'Kumari Puja', a tradition that worships pre-pubescent girls as manifestations of goddess Taleju, the Nepalese name for Goddess Durga.

The ritualistic tradition is held annually in the Himalayan nation and is significant among its Newar community, which seeks the blessings of the goddess to ward off bad luck and diseases. Also Read | Pakistan PM Imran Khan Initiates Dialogue With Taliban for Formation of Inclusive Govt in Afghanistan.

"We always pray to God for the wellbeing of children and their health. Practices from Hinduism, Buddhism and Tantrism are followed to worship the Living Goddess Kumari. After conducting this ritual, none of the girls participating in it would have any health problems," Rajan Maharjan, a Kathmandu local told ANI. Also Read | Zydus Cadila Gets USFDA Health Regulator Nod to Market Depression Treatment Drug Vortioxetine in US Market.

The mass worship of "Kanyas" or girls held on Saturday was attended by a total of 54 girls mostly dressed as Goddess Kumari. The worship is organized every year on the occasion of Indra Jatra by 'Kumari Puja Sewa Committee Bhaktajan Pariwar'.

Nepal has a unique tradition of worshipping "Kumari" the Living Goddess who is appointed at certain intervals of time following a strict selection process. A young Newar girl is chosen to represent the Goddess Kumari as an incarnation of Goddess Taleju, the tutelar deity of the Malla dynasty and the Shah dynasty which inherited the tradition.

The Living Goddess is worshipped with great reverence and even the Shah Kings followed the tradition of receiving tika and blessings from her. Dating back to the 17th century, the practice was institutionalized by a Malla king.

Legend has it that King Jaya Prakash Malla under the influence of alcohol while playing a game with the visiting Goddess Taleju in the form of a human, started to lusting after her.

This offended the Goddess and she ordered the king to take an oath that he would select a virgin girl within whom she would always reside. This tradition continues to this day.

The Malla dynasty was ousted by King Prithvi Narayan Shah but the tradition of revering the Goddess Kumari was continued by the conquerors. Until 2008, the Shah King would go to the Kumari to receive tika on his forehead which symbolized the empowering of the monarch.

Young candidates from the Shakya caste among the Newars, many of them as young as four years old, go through an extremely strict selection process before one of them is chosen to represent the Goddess.

She must remain calm and show no signs of fear while being put through numerous tests. Once chosen, she has to live within the Kumari Ghar (Kumari's House), her feet must never touch the ground and will leave her residence only during certain festivals.

Once she reaches puberty, the Kumari relinquishes her 'Living Goddess' title to another chosen girl.