South Korean auto giant Hyundai Motor on Tuesday unveiled the IONIQ 5, the first model embedded with its own electric vehicle (EV) platform, as it strives to morph into a future mobility solutions provider. Hyundai said that it will launch the IONIQ 5 in Europe next month. 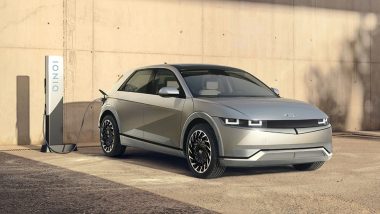 Seoul, Feb 23: South Korean auto giant Hyundai Motor on Tuesday unveiled the IONIQ 5, the first model embedded with its own electric vehicle (EV) platform, as it strives to morph into a future mobility solutions provider. The IONIQ 5 midsize crossover utility vehicle is the first model equipped with Hyundai Motor Group's own EV-only electric-global modular platform (E-GMP), Hyundai said in a statement. Hyundai said that it will launch the IONIQ 5 in Europe next month, in Korea in the second quarter and in the US and other markets later this year. Hyundai & Aptiv Reportedly Tested Autonomous Vehicles in the US.

"The production of the IONIQ 5 begins in Hyundai's Ulsan plant next month. The company aims to sell 70,000 units globally this year, including 26,500 units in domestic market, and 100,000 units next year," Hyundai Motor President and Chief Executive Chang Jae-hoon said in an online press conference.

IONIQ 5 is a bold step into the brave new EV era with customizable, spacious, and welcoming interiors. The EV is more eco-friendly than ever, with materials such as eco-processed leather, recycled yarn, and bio paint. pic.twitter.com/lHfNoJQcfQ

The all-electric car is priced at 50 million won to 55 million won ($45,000-$49,500). With government subsidies, it can be purchased for around 40 million won. Among other features, the E-GMP's flat battery and long wheelbase allow for a more spacious and customisable interior for passengers and cargo, unlike crossovers with internal combustion engines and conventional steer-by-wire systems, the CEO said.

The IONIQ 5 is available in two versions: The long-range model with a 72.6 kilowatt-hour (kWh) battery and the standard model with a 58 kWh battery. The long-range version can travel up to 430 km on a single charge and charge 80 per cent of the battery capacity within 18 minutes, the automaker said.

The all-electric model boasts "user-friendly" functions such as the gear selector located behind the steering wheel, the sliding centre console which offers passengers more flexibility in front seats and the vehicle-to-load (V2L) function which serves as a charger on wheels. The V2L function allows customers to charge electric devices such as coffee machines and electric bicycles, reports Yonhap news agency.

Hyundai said it will receive pre-orders for the IONIQ 5 from Thursday in the domestic market. To strengthen its presence in the eco-friendly vehicle market, Hyundai also plans to introduce the IONIQ 6 midsize sedan in 2022 and the IONIQ 7 large SUV in 2024. It will begin using alphanumeric names like its bigger rivals, such as BMW, whose models are named Series No. 1-8. Hyundai's independent Genesis brand also plans to launch an all-electric model this year and will eventually fill its lineup with zero-emission models in the future.

(The above story first appeared on LatestLY on Feb 23, 2021 06:14 PM IST. For more news and updates on politics, world, sports, entertainment and lifestyle, log on to our website latestly.com).