Airbag for Passenger Side on Front Seat to Become Mandatory for Cars, Says Report

Airbag for the passenger side on the front seat will soon become mandatory for all cars in India. Airbag has been mandatory for the driver's side since July 1, 2019. 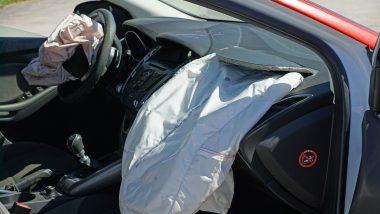 The Ministry of Road Transport and Highways has issued a draft notification to make necessary amendments to the automotive industry standard (AIS) concerned with safety features, TOI reported on Sunday. "There is a consensus across the globe that vehicles should have maximum features to protect the occupants in case of a crash. We have also made it clear that there won't be any compromise on safety features irrespective of the cost," a government official was quoted as saying. Air Bag Fragments Kill Volvo Driver, Touching off Recall.

From when airbag for the passenger side on the front seat will be mandatory is yet to be decided by the government. A source told TOI that one year would be sufficient enough to comply with this new safety measure. At present, an airbag is mandatory for the driver's side, which leaves the other person on the front seat vulnerable to serious injury, or even death, if the car meets an accident.

Previously, low-cost safety features such as speed alert, reverse parking sensors and seat-belt reminder have been standard features in vehicles. In addition to a mandatory airbag for the passenger side on the front seat, the government is likely to do away with child lock systems for all four-wheelers used for commercial transport purposes. Currently, it’s mandatory for drivers of such vehicles to disable the child lock system for passengers safety.

(The above story first appeared on LatestLY on Dec 20, 2020 06:55 PM IST. For more news and updates on politics, world, sports, entertainment and lifestyle, log on to our website latestly.com).