The conference shed a light on the influence and role of the civil aviation industry in international exchanges in the new development stage. As specially invited guests, officials of the Chinese and Italian embassies, Chinese and Italian experts and scholars, employees of CAE and Huanqiu.com carried out in-depth discussions and exchanges on the content of the report. 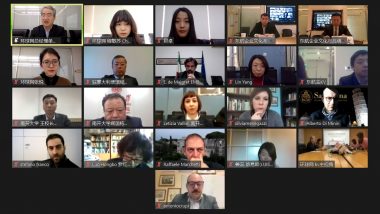 Recently, Luiss Guido Carli, the Sant’Anna School of Advanced Studies in Italy and Nankai University in China jointly released a research report entitled the Role of China-Italian Civil Aviation Cooperation on the Development of Cultural Tourism Between the Two Countries Under the “B&R” Initiative—Taking the Development of China Eastern Airlines in Italy as an Example, and held a video conference on December 14. The conference shed a light on the influence and role of the civil aviation industry in international exchanges in the new development stage. As specially invited guests, officials of the Chinese and Italian embassies, Chinese and Italian experts and scholars, employees of CAE and Huanqiu.com carried out in-depth discussions and exchanges on the content of the report.

Li Bin, Minister Counsellor for Economic and Commercial Affairs at Chinese Embassy to Italy, pointed out that the COVID-19 epidemic has disrupted the plan of Sino-Italian exchanges, but thanks to the support of civil aviation, the focus of cooperation between China and Italy this year has shifted from cultural tourism to cooperation in the fight against the epidemic. CAE helped to send three groups of Chinese experts to Italy to support the fight against the epidemic, and successively organized nearly 40 cargo charter flights to create a dedicated flight route. Shouldering responsibilities and missions, CAE and Italian partners have jointly built a “Silk Road in the Air”. 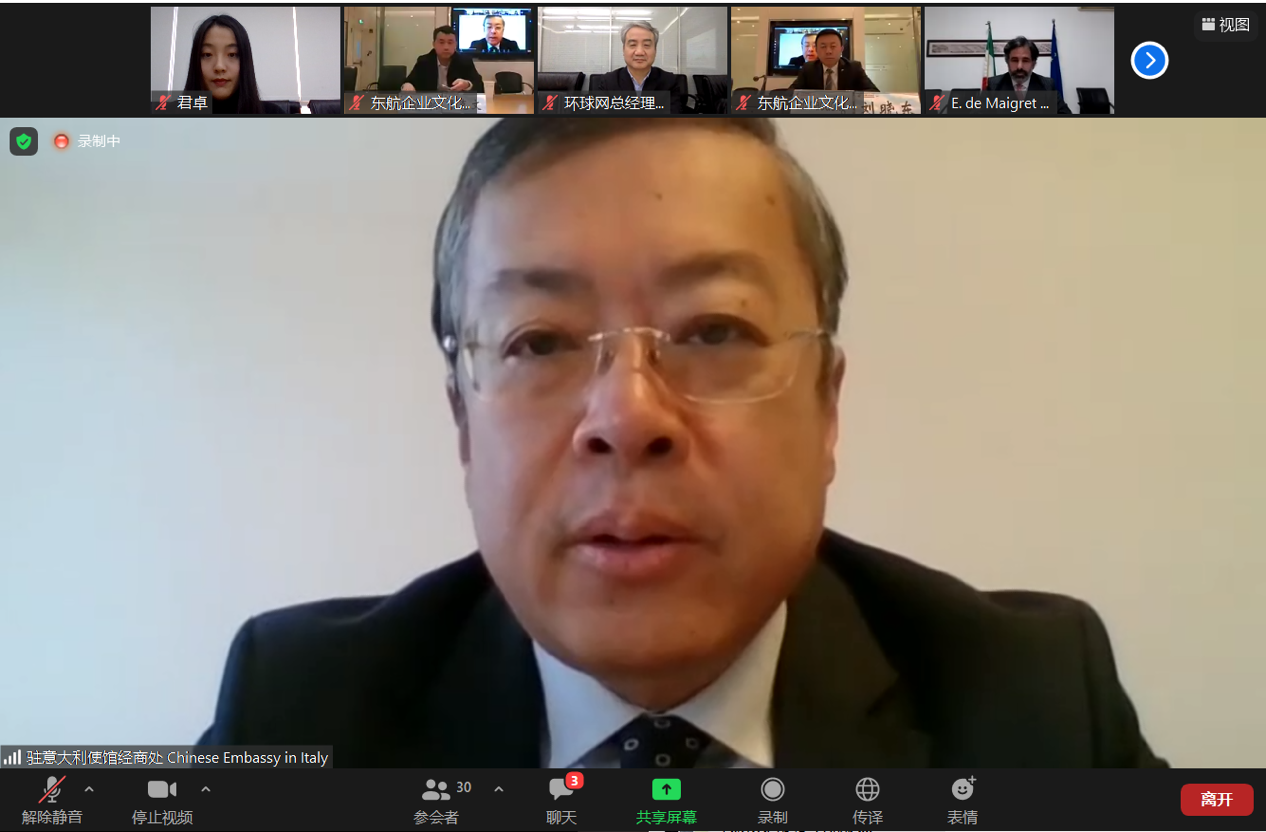 Emanuele De Maigret, Minister Counselor and Head of the Economic and Commercial Office of the Italian Embassy in Beijing, spoke highly of the important role of civil aviation in international anti-epidemic cooperation and international people-to-people exchanges, and expressed full confidence in the future cooperation and exchanges between China and Italy. In 2022, the China-Italy Cultural Tourism Year, Beijing and Milan will host the Winter Olympic Games with the help of CAE and other aviation enterprises. The cooperation between China and Italy in culture and tourism will show fresh vitality. 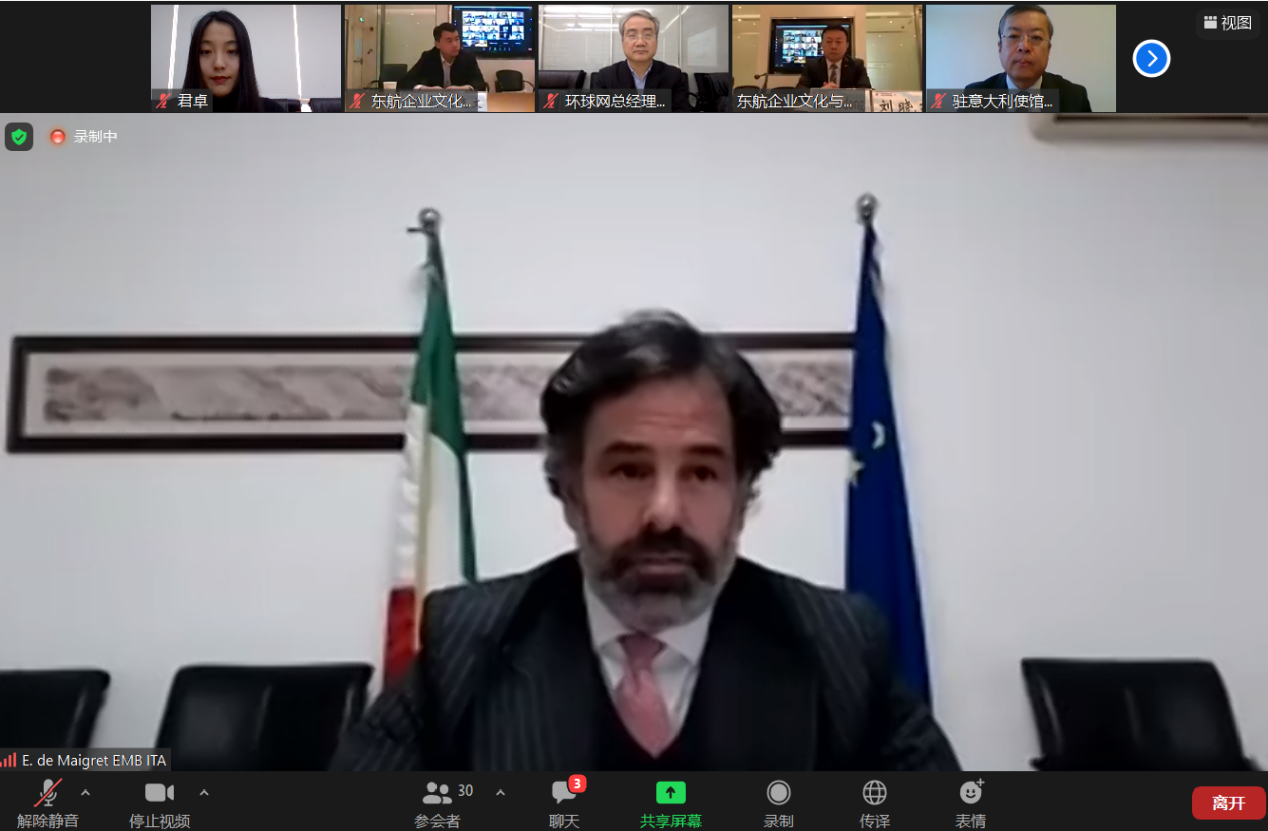 Professor Rafaele Marchetti, Deputy Rector for Internationalization of Luiss Guido Carli, Alberto Di Minin, a professor of the Sant’Anna School of Advanced Studies, and other think-tank scholars agreed that the research on the development of CAE in Italy over the past nine years shows that civil aviation has not only facilitated international cooperation, but also promoted cultural and people-to-people exchanges.

Chinese aviation enterprises are playing an increasingly important role in Sino-Italian cultural exchanges. Professor Wang Xinsheng, Vice President of Nankai University, thought highly of this academic cooperation across various fields, and said that this joint research has set an example of cooperation among universities, enterprises and media platforms, and is of great significance on the occasion of the 50th anniversary of the establishment of diplomatic relationsbetween China and Italy.

The report not only reviewed the development process of Sino-Italian civil aviation cooperation, but also focused on the countermeasures taken by CAE to fight against the epidemic this year, and made an in-depth analysis of the ways for enterprises to strengthen innovation, seek transformation and further development. 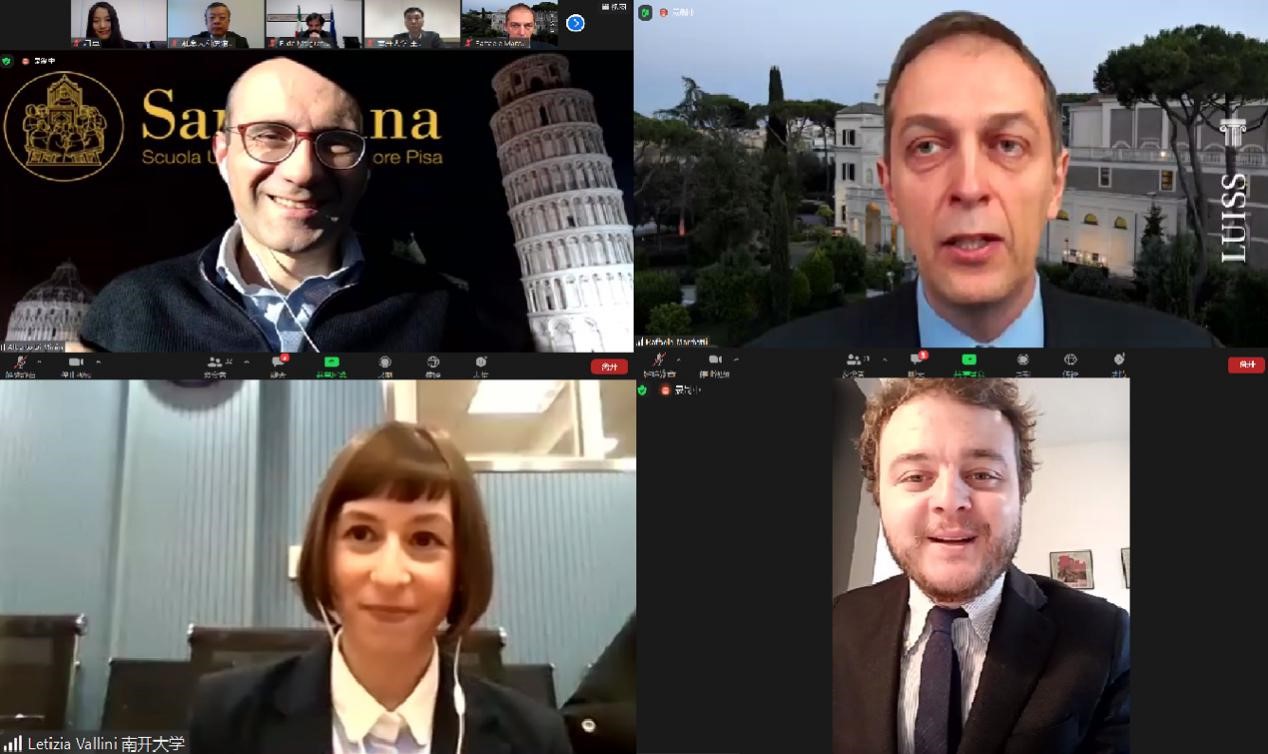 A series of hotspot topics such as CAE’s transportation of anti-epidemic materials and medical experts to assist Italy and the launch of CAE’s Fly at Will program in the civil aviation industry have sparked in-depth discussions between Chinese and foreign scholars on the opportunities for global cooperation and the development of aviation enterprises when the epidemic is under control.

Liu Xiaodong, General Manager of the Corporate Culture and Brand Management Department of CAE Group, said that CAE will continue to actively build the Silk Road in the air and is committed to promoting the exchanges between China and Italy in culture and tourism. Chinese and Italian think tanks facilitate information sharing between China and Italy, while CAE promotes people-to-people exchanges between the two countries.In the future, CAE will continue to cooperate with Italian partners to boost economy, restore confidence and tide over difficult times together. 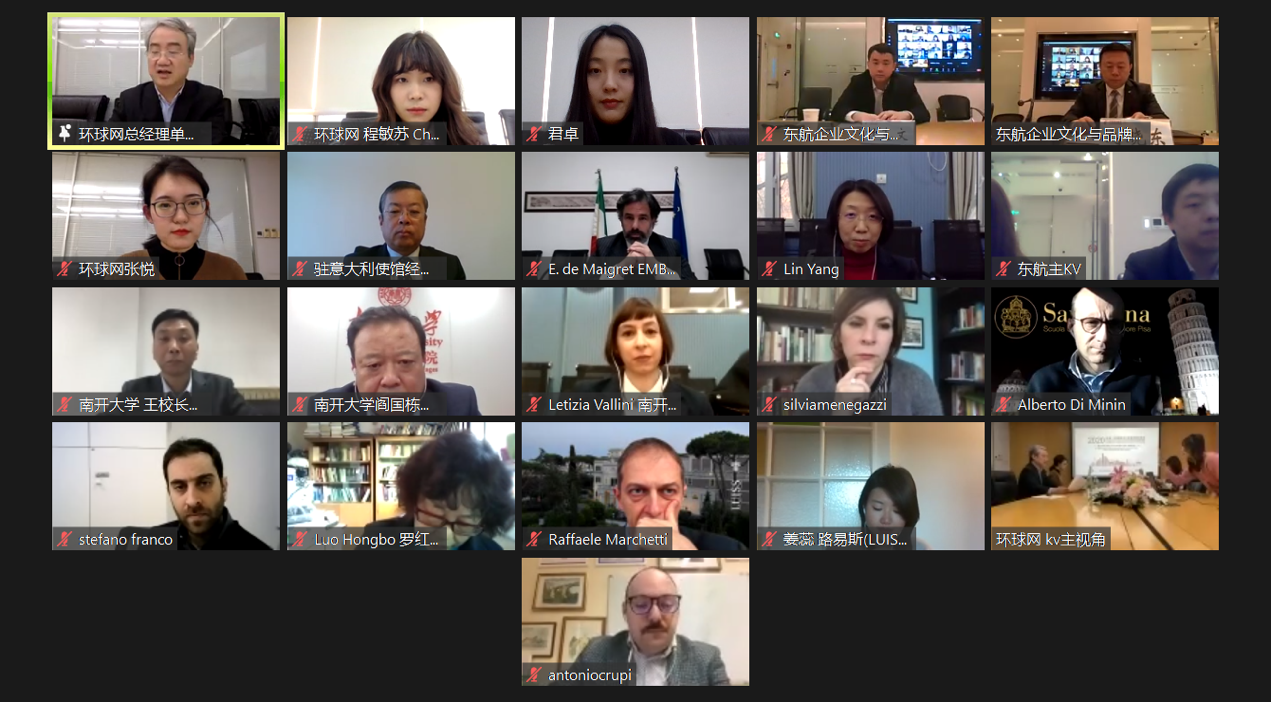 Professor Luo Hongbo, a research fellow at the Institute of European Studies of the Chinese Academy of Social Sciences and Chairman of the Italian Research Branch of the Chinese Association for European Studies, believes that this research topic has incorporated advanced ideas and will provide theoretical support for the recovery of exchanges between the China and Italy in culture and tourism when the epidemic is under control.

Taking the specific cases of CAE in international cultural exchanges as the research object, the report demonstrates professionalism and offers practical guidance on similar researches. The cooperative research between the university think tanks of China and Italy has not only provided a new model for international exchanges in the context of the epidemic, but also inspired new ideas for the two countries to deepen school-enterprise cooperation and promote people-to-people exchanges.