Jeep Electric SUV Likely To Be Launched Next Year: Report

US based automaker Jeep, owned by Stellantis, has revealed the first images of its upcoming electric SUV and confirmed that it will launch in 2023. 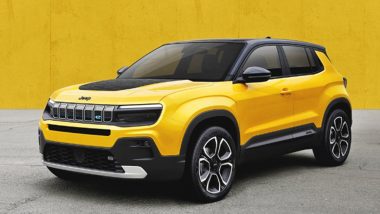 San Francisco: US based automaker Jeep, owned by Stellantis, has revealed the first images of its upcoming electric SUV and confirmed that it will launch in 2023. According to The Verge, Jeep has been slower to embrace electrification as compared to many of its rivals. The automaker has released plug-in hybrid versions of its Wrangler and Grand Cherokee SUVs and plans an off-roading version of the Grand Cherokee, the Trailhawk, which also comes with a hybrid motor. 2021 Jeep Wrangler SUV Launched in India at Rs 53.9 Lakh, Check Features & Specifications.

But the unnamed SUV coming out next year will be Jeep's first purely battery-electric vehicle, the report said. The automaker recently announced that it would release "zero-emission" versions of all of its vehicles by 2025, along with plug-hybrid variants.

Today, we revealed concept images of the first-ever 100% battery-electric Jeep® SUV. This vehicle is our next step to the achievement of our brand vision of Zero Emission Freedom and will be launched early next year. More information to come! pic.twitter.com/079TeB0gKM

The new Jeep EV would fall within the comprehensive plan last year by Stellantis, the multi-national conglomeration that formed last year when Fiat Chrysler merged with the French PSA Group, to electrify the lineups at most of its brands. That includes EV versions of the Ram 1500 pickup truck and an electric Dodge muscle car.

On Tuesday, Stellantis also teased the upcoming Ram 1500 truck with images showing off the vehicle's lighting setup. The image appears to be just a design sketch, leaving open the possibility that Ram has yet to settle on a final form of its upcoming electric truck.

Ram is also making an electric ProMaster delivery van that will be incorporated into Amazon's fleet starting in 2023, the report said.

Both the Jeep EV and Ram 1500 EV will likely use Stellantis' STLA platform, which is one of the four platforms used by the automaker for its upcoming lineup of EVs, it added.

(The above story first appeared on LatestLY on Mar 02, 2022 04:51 PM IST. For more news and updates on politics, world, sports, entertainment and lifestyle, log on to our website latestly.com).