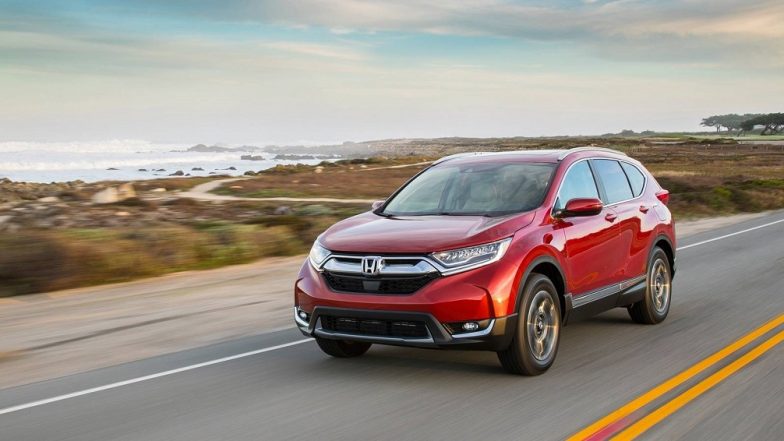 After launching new generation Amaze sedan in India, Honda Car India is now gearing up for the launch of next-generation Honda CR-V SUV. As per the report from Autocar India, the Japanese car maker could launch the SUV in the country by next month, probably October 9. The SUV was showcased at Auto Expo 2018 earlier this year in February.  Likely to be powered by an all-new diesel engine, new Honda CR-V 2018 is expected will be bigger than the outgoing model. For the first time in the domestic market, the Japanese car maker will be introducing the CR-V in diesel avatar along with petrol iteration. Discounts on Cars This Ganesh Utsav 2018: Offers & Deals Up to Rs 60,000 on Maruti Swift, Dzire & Hyundai Elite i20.

As far as the engine specifications are concerned, the new diesel engine will be a 1.6-litre Earth Dreams engine series that can produce 118bhp and 300Nm of torque. To bring down the prices, the company will employ a single turbo instead of twin-turbo setup. The petrol unit, on the other hand, will be a 2.0-litre petrol engine that will be tuned to make 152bhp of max power along with 189Nm. Transmission duties on the diesel engine will be carried out by a 9-speed automatic unit with paddle shifters and an optional four-wheel drivetrain. The petrol unit will get a CVT gearbox transmitting power to the front wheels.

Inside the cabin, the new Honda CR-V 2018 is expected to feature a 7-inch touchscreen infotainment unit with Apple CarPlay and Android Auto compatibility. It is also expected that the SUV will feature dual-zone climate control, electrically adjustable driver seat and more. However, the company has not revealed any specifications and features of the new CR-V. TVS Apache RTR 160 4V Road Test Review: A True Limitless 160cc Racing Machine.