The luxury Lamborghini was reportedly owned by the Indian cricket team captain way back in 2015 and now it has been made available for sale at a Kochi showroom for luxury cars. Besides being a cricket icon, Kohli is also known for his love for stylish cars. 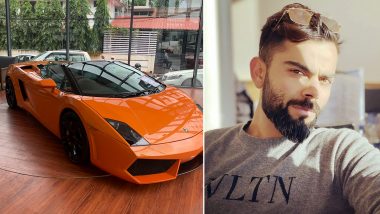 Apart from his highly admirable cricketing skills, Indian captain Virat Kohli also is an avid car lover and also possesses an enviable collection. A Lamborghini Gallardo Spyder, which was once reportedly owned by the Indian captain, has now been put up for grabs! Yes, you read that right. The orange coloured stylish car has been put up for sale at Royal Drive, a showroom for luxury cars in Kochi the luxury used car showrooms in Kochi and is priced at a whopping Rs 1.35 crore! Ardent Kohli fans, who also love luxury cars can now have the opportunity to get their hands on this beast. Kohli, according to information gathered from an automobile website, had bought the car back in 2015. Virat Kohli to Retire As RCB Skipper After IPL 2021 Season

He had then sold the Puducherry registered car after using it for some time and now it is up for sale. "This is a 2013 model Lamborghini used by the cricketer for a short period. It has run only up to 10,000km,” the marketing manager at Royal Drive, said, adding, “We bought this celebrity car from a Kolkata-based premium and luxury preowned car dealer in January 2021,” he added.

According to him, the car can accelerate from 0-100km/hour in just a short span of four seconds and electronically can attain a top speed of 324km per hour.  A 5.2 litre naturally aspirated V10 engine powers the Gallardo Spyder, whose model name is also LP560-4. The name of this model was inspired by the breed that was used to make the Miura bulls in 1842. The last Gallardo model came out in 2015.

The star cricketer is currently in the UAE where he is prepping for the second phase of IPL 2021 with a match against two-time champions Kolkata Knight Riders in Abu Dhabi on Monday.

(The above story first appeared on LatestLY on Sep 20, 2021 01:24 PM IST. For more news and updates on politics, world, sports, entertainment and lifestyle, log on to our website latestly.com).