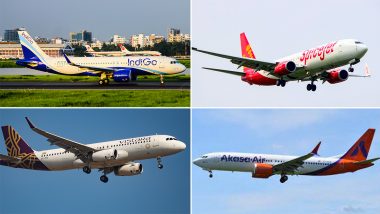 It looks like the Indian Aviation industry is going through a rough patch. First, the budget carrier, SpiceJet, faced issues as the no-frills airline reported eight incidents of malfunction in the past 18 days. Market segment leader Indigo and Tata's Vistara Airline also confirmed incidents of technical glitches over the past two days. And all this is happening at a time when a new Airline Akasa Air, backed by Indian Stock Market Big Bull Rakesh Jhunjhunwala, is set to enter the Indian Aviation Industry by July end.

On July 5, a Delhi to Dubai SpiceJet international flight with nearly 150 people on board had to be diverted to Pakistan's Karachi following a suspected fuel leak and landed safely at Jinnah International Airport. Following this, SpiceJet operated replacement aircraft from Mumbai. The replacement aircraft landed at 5:45 PM Pakistan Time. Rakesh Jhunjhunwala Plans to Set Up New Ultra-Low Cost Airline Akasa Air, Looking to Get 70 Planes in 4 Years

Same day, a few hours later, SpiceJet Q400 aircraft made a priority landing at Mumbai airport after its outer pane of a windshield cracked midair at an altitude of 23,000ft.

Another technical malfunction was reported on July 5, when a cargo plane flying to China returned to Kolkata after its weather radar stopped responding. The Indian stock market also reacted to these multiple instances of technical glitches, as the share price of the Ajay Singh led SpiceJet fell 7 per cent to hit 52-week low of Rs 35 on BSE.

On Wednesday July 6,  Vistara Airlines , a joint venture between Tata Sons and Singapore Airlines,  also confirmed that its Bangkok-Delhi Vistara flight- Flt UK-122, landed at Indira Gandhi International airport on a single-engine. Post Runway vacation Engine 2 was shut down for single-engine taxiing. According to reports, the cabin crew of an IndiGo Raipur-Indore flight detected smoke inside the aircraft after it landed on Tuesday, July 5. However, the airline later clarified that the smoke which was reported in the cabin was actually mist.

Amid all this, Akasa Air, backed by ace investor, Rakesh Jhunjhunwala, is gathering netizens' attraction on social media handles. Akasa Air is the latest low-cost airline planning to start operations in India by July end. Founded in December 22, 2021, the airline will operate Boeing 737 MAX aircraft and is headquartered in Mumbai. Akasa Air Unveils Crew Uniform

Here’s what netizens have to say about all unfortunate incidents and are eagerly waiting for Akasa Air’s Launch:

Great! Now we need to check interview schedule of airlines before booking a flight.

When is Akasa hiring, any idea?

Of course, Akasa Airline promoters have nothing to do with this https://t.co/5K5NSSp3vr

Hope Jet Airways and Akasa let us know well in advance when they plan their recruitment drive. That day most airlines won't function as most Crew will call in sick to go for these interviews.

Suddenly all this halla about incidents on various airlines appearing in the media just before the launch of Akasa Airlines is rather interesting. https://t.co/DAmdSJT593

While all this is happening people are eagerly waiting for Akasa Air's launch and there are likely to be massive price wars between market leader Indigo, Ajay Singh led SpiceJet and Tata's Air India, Air Asia and Vistara group and Rakesh Jhunjhunwala's Akasa Air to win customers.

(The above story first appeared on LatestLY on Jul 07, 2022 12:44 PM IST. For more news and updates on politics, world, sports, entertainment and lifestyle, log on to our website latestly.com).