Meanwhile, Prabhas is all set to enthrall the fans with his high- octane action movie 'Saaho. 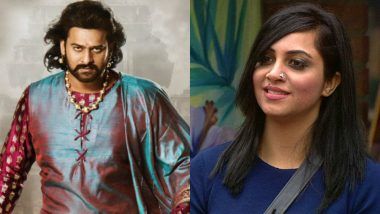 Bigg Boss 11 finally got its winner in Shilpa Shinde and most of the fans are quite satisfied with the results. However, this season gave us many controversial names like Priyank Sharma, Hina Khan, Bandagi Kalra and of course Arshi Khan! Popularly termed as 'begum', Arshi has a lot of fan following on social media and many of them were upset due to her eviction. Now, the fresh reports have surfaced that the bold beauty of the house has already signed her first film with none other than Baahubali fame Prabhas!

Twitter handle 'Arshi Khan (@ArshiKOfficial)' posted this big announcement to stun the fans. The tweet reads, "#ArshiKhan signed on for a big film project also starring Prabhas. Thank you @BeingSalmanKhan @ColorsTV @EndemolShineIND @BiggBoss. Special thanks to #NevadaPutman." While we don't know whether this is the official account of the BB 11 contestant, the news is quite huge to create the stir. There is also no confirmation from the rebel star on having Arshi in his next flick.

There are also reports surfacing that Arshi will be next seen in Rohit Shetty's stunt based reality show Khatron Ke Khiladi. Following the footsteps of Bigg Boss 10 contestants Lopamudra Raut and Manveer Gurjar, she is all set to show off her dare- devil side. The controversy queen is reportedly learning swimming for the show.

Meanwhile, Prabhas is all set to enthrall the fans with his high- octane action movie 'Saaho.' The handsome Tollywood star will romance Bollywood diva Shraddha Kapoor in this much awaited film. Well, it will be interesting to watch begum romance the mighty Baahubali, if at all it is happening in reality!

(The above story first appeared on LatestLY on Jan 20, 2018 11:38 AM IST. For more news and updates on politics, world, sports, entertainment and lifestyle, log on to our website latestly.com).