Malaika Arora had enthralled the audience with her sizzling moves in the peppy number, "Munni Badnaam Hui." 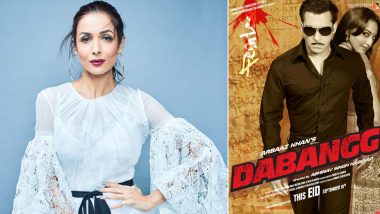 It has been ten whopping years since Dabangg released! Feeling old, right? Actress Malaika Arora recently reminded everyone that the Salman Khan-Sonakshi Sinha starrer just completed a decade. She posted a mini trailer of the movie celebrating this special moment. She had enthralled the audience with her sizzling moves in the peppy number, "Munni Badnaam Hui." Of course, it is bound to be special for her! Malaika Arora Tests Positive For COVID-19 After Beau Arjun Kapoor.

The film also marks 10 years of Sonakshi's debut in Bollywood. Salman Khan introduced this talented actress with mast mast do nain and since then, she has only proved her mettle by experimenting in various genres. Credit also goes to music composer duo Sajid and his later brother Wajid along with Lalit Pandit for the amazing music album.

Dabangg is directed by Abhinav Kashyap and co-produced by ex-couple Malaika and Arbaaz Khan. Dabangg 2's director's chair was taken over by Arbaaz Khan in 2012. In 2019, Prabhu Deva stepped in to helm the third installment aka Dabangg 3.

There might be more installments to come into fruition but the popularity and the magic of the first installment remains untouched. After all, firsts are firsts! What is your take on Dabangg franchise? Do let us know in the comments box below.

(The above story first appeared on LatestLY on Sep 10, 2020 11:53 AM IST. For more news and updates on politics, world, sports, entertainment and lifestyle, log on to our website latestly.com).