Mohabbatein completed 20 years which silenced many SRK critics and revived Amitabh Bachchan's career in a big way. But all that Twitter is remembering on this day is how memorable everything about this movie was. 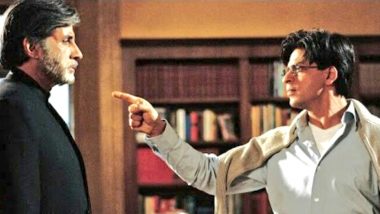 Mohabbatein happened at the turn of the new millennium. The year 2000 was more iconic for a variety of reasons. The start saw unprecedented fan following for a man who said Kaho Naa...Pyar Hain in two getups and by Diwali, it had become a blockbuster year thanks to Aditya Chopra's second directorial Mohabbatein. Yes, he took five years to come up with his next film. But that's a story for another day. Today, the film completed 20 years and everyone on Twitter is getting deeply nostalgic about it. Shah Rukh Khan Provides 2000 PPE Kits to Frontline COVID-19 Warriors in Chhattisgarh

Mohabbatein released during Diwali, Shah Rukh Khan's preferred festival. These are the movies that could have led to everyone believing that Diwali is his thing, including the actor himself, perhaps. It also revived the career of one of the biggest superstars of Indian cinema, Amitabh Bachchan. His career was going through a major slump which also included his financial condition. This movie along with Kaun Banega Crorepati brought him back on track and we are so glad.

Check out how people on Twitter are remembering this epic movie:

Message in a film

Mohabbatein is a very beautiful and sensitive movie.

Love is all conquering and with it we can overcome anything.@iamsrk was absolutely phenomenal in his role.@SrBachchan left an impact.

Those were days when movies were watched again and again at the theatres!

The movie which I saw 9 times in the theatre , school days yaad a gaye #20YearsOfMohabbatein

If SRK can hallucinate about Aishwarya Rai Bachchan, why can't this person?

Everything that made movies so damn beautiful, once upon a time

Celebrating #20YearsOfMohabbatein ❤ from power packed performance to unforgettable dialogues, from bringing 2 superstars together in a frame to superhit songs & of course the precious lessons of love by Raj Aryan Malhotra❤ Mohabbatein has everything to be called a pure classic! pic.twitter.com/nDyGDHlTgE

The pratishtha, anushasan and parampara guy!

HOW AMAZINGLY WELL MADE VIDEO IS THIS.

THE DIALOGUE OF NARAYAN SHANKAR IN BG OF VISUALS THAT OPPOSE WHAT HE SAYS.

I dare you, said politely!

Even Farah Khan admitted she wasn't supposed to if Aishwarya Rai Bachchan was SRK's imagination in the movie or not. We think he had PTSD after her death!

(The above story first appeared on LatestLY on Oct 27, 2020 02:22 PM IST. For more news and updates on politics, world, sports, entertainment and lifestyle, log on to our website latestly.com).