50 Years of Amitabh Bachchan in Bollywood: Twitterati Celebrates Golden Jubilee of the Legendary Actor in Bollywood 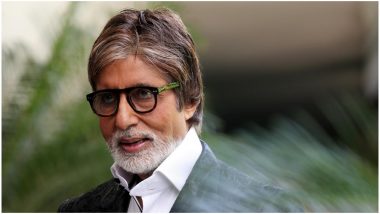 It has been 50 long years since the legendary Amitabh Bachchan has been in the Hindi film industry and we can't stop thanking our stars for that! If there is someone who Bollywood actors look up to or are keen on working with, it has gotta be Amitabh. He started his filmy career in 1969 as a voice narrator in Mrinal Sen's National Award-winning film Bhuvan Shome. His first acting role was as one of the seven protagonists in the film Saat Hindustani, directed by Khwaja Ahmad Abbas. Interestingly, when Sr Bachchan entered Bollywood he was termed as a "failed actor" until the age of 30. However, he then did Zanjeer in 1979 (the one where he plays "The Angry Young Man") and post that, there was no looking back! Badla Trailer: Here’s All You Need to Know About the Invisible Guest, the Spanish Thriller That Inspired Amitabh Bachchan and Taapsee Pannu’s Film.

Check out this fan- made tribute here:

We last saw him in Pink which was highly appraised by critics and audience alike. It was a courtroom drama where Big B played the role of a lawyer with Taapsee Pannu as the lead. However, his last film, Thugs of Hindostan failed miserably at the box office. We are next going to be seeing him in Brahmastra starring Ranbir Kapoor, Alia Bhatt and Mouni Roy and Badla, which stars Taapsee.

(The above story first appeared on LatestLY on Feb 15, 2019 09:16 AM IST. For more news and updates on politics, world, sports, entertainment and lifestyle, log on to our website latestly.com).