A reply by chef Vikas Khanna during an interview about his food distribution drive in India during the lockdown owing to COVID-19 has been praised widely. During which BBC anchor asked if the chef understood about hunger as he does not come from a rich family in India. And what the chef replied has impressed Twitterati. 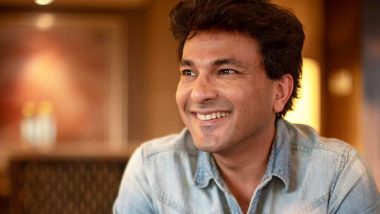 A reply by chef Vikas Khanna during an interview about his food distribution drive in India during the lockdown owing to COVID-19 has been praised widely. The 48-year old chef, had distributed dry ration to old-age homes, orphanages and leprosy centres in India during the pandemic. Khanna was speaking about the drive when the BBC anchor asked if the chef understood about hunger as he does not come from a rich family. As the video went viral, people took to Twitter praising the chef for his reply. He had received a lot of praises earlier for ensuring food reaches the needy. Chef Vikas Khanna Presents His Book Utsav to Queen Elizabeth II, Breaks Protocol And Requests Table to Show the 'Pride And Beauty' of India (Watch Video)

In the video, the anchor asks Khanna, "You’ve cooked for the Obamas, you’ve been on the TV show with Gordon Ramsay. But it wasn’t always that way, was it? You’re not from a rich family. So, I dare say, you understand how precarious it can be in India." To which Khanna replies, "I understand, but my sense of hunger didn’t come from India so much because I was born and raised in Amritsar. We have a huge community kitchen where everyone gets fed. The entire city can feed there. But my sense of hunger came from New York when I was struggling here from the very bottom."

Indians Are Not Impressed!

The kind of disgusting questions being asked is just appalling

@BBCWorld India never had hunger problems till Churchill came along and swindled the millions of tons of grains from India to feed an impoverished army fighting for an imperialist cause. Britain should have the balls to read some real history which is hardly glorifying.

Colonial hang over still in BBC

This is Going to be Remembered for Long!

The anchor will remember this! Don’t mess with the spirit of “Indianess”!

Meanwhile, the Masterchef who is a double PhD holder is working on his 3rd PhD (A Doctor of Philosophy). His first doctoral thesis was on Indian cuisine and festivals while the second one was given to him by for his outstanding record of culinary art, philanthropy, altruism and humanitarianism and his global reach as a chef. His third PhD would be in: 'Climate Change effects on Pollination, Natural Cycles, Soul Structures, and Spices.'

(The above story first appeared on LatestLY on Jun 28, 2020 08:25 PM IST. For more news and updates on politics, world, sports, entertainment and lifestyle, log on to our website latestly.com).