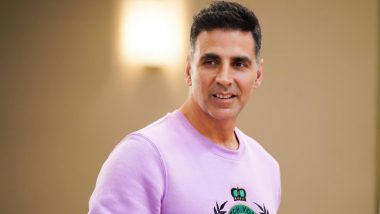 Bollywood actor Akshay Kumar has revealed that he drinks cow urine every day for ayurvedic reasons. The actor, who is currently shooting in Scotland for his upcoming film "BellBottom" with Huma Qureshi and Lara Dutta Bhupathi, joined British adventurer and host Bear Grylls for an Instagram Live, to talk about going on a jungle adventure with him. When Huma asked Akshay how he convinced himself to drink elephant poop tea on the show, Akshay said: "I wasn't worried. I was too excited to be worried. I have cow urine because of ayurvedic reasons every day, so that was okay." Into The Wild With Bear Grylls: Akshay Kumar Suffered Bruise in the Jungle While Climbing Rope Ladder at the Extraction Point.

Akshay went on a wild adventure across Bandipur Tiger Reserve in Karnataka with popular British adventurer and host Grylls to shoot an episode of "Into the Wild with Bear Grylls", which will premiere on Discovery+ on September 11.

Akshay also confessed that doing an episode with Grylls was a "highlight for him".

In the Instagram Live session, Bollywood actor Ranveer Singh dropped many comments -- wishing Akshay a belated happy birthday, complimenting his moustache and also his hoodie. Akshay Kumar Birthday Special: Did You Know His Movie ‘Debut’ Was All of Seven Seconds but It Gave Him the Name We Know Him by Now? (Watch Video).

Check Out The Insta Live Here:

Akshay revealed that the moustache is for his upcoming project "BellBottom", adding that his family is not a fan of his new look.

During the conversation, Grylls also shared that he did not know Akshay personally, and after meeting him, he realised that he was a "fun guy with no ego". He also appreciated Akshay for his fitness, saying: "Out of all the guests we have had over the years, he is definitely Tier-1."

Huma then asked if they plan on working again, to which Grylls said: "It will be great to do something else with him. Maybe another show."

(The above story first appeared on LatestLY on Sep 10, 2020 09:10 PM IST. For more news and updates on politics, world, sports, entertainment and lifestyle, log on to our website latestly.com).