Akshay Kumar shared a post on Menstrual Hygiene day by sharing a throwback picture from his film, PadMan. 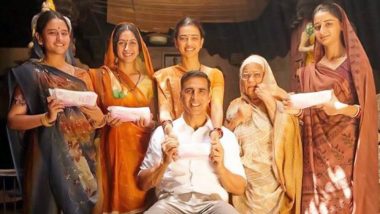 May 28 is observed as an annual awareness day for Menstrual Hygiene. The initiative was first started by a German-based NGO WASH United in 2014. It aims to highlight the importance of maintaining good menstrual hygiene among women from across nations. Actor Akshay Kumar who starred in a film surrounding menstrual hygiene, PadMan has now taken to Twitter to share a post on the Menstrual Hygiene Day. The actor essayed the role of a social entrepreneur who develops a system to manufacture sanitary pads at a low-cost and creates awareness on the need for menstrual hygiene in the film. Sharing a throwback picture from the film's set, Akshay posted a picture with the film's lead actress Radhika Apte and other supporting female characters holding sanitary pads. After Shah Rukh Khan and Akshay Kumar, Rohit Shetty to Collaborate with Salman Khan for a New Project?

Akshay tweeted the photo and wrote, "Happy #MenstrualHygieneDay to all the Girls, Mothers and Sisters. Lets all help every girl child feel Hygienic, Safe & Confident every day of the month #Period"

Happy #MenstrualHygieneDay to all the Girls, Mothers and Sisters. Lets all help every girl child feel Hygienic, Safe & Confident every day of the month #Period 🙏🏼 pic.twitter.com/Id7sVHFYS0

PadMan became a significant film in Bollywood to talk about menstruation and the need for menstrual hygiene for the first time. The film also starred Sonam Kapoor in a key role. The film's story was inspired by the real-life hero, Arunachalam Muruganantham, who successfully produced low-cost sanitary napkins in India. Laxmmi Bomb: Akshay Kumar Requests Raghava Lawrence To Come On Board as Director Again- Read Full Statement

One of the key objectives of Menstrual Hygiene Day is to raise awareness about the difficulties women and girls face during their menstruation. The awareness day helps bring together groups working for similar causes to work for the greater good. It is indeed commendable on Akshay's part to do his bit by spreading the message through his Twitter.

(The above story first appeared on LatestLY on May 28, 2019 04:43 PM IST. For more news and updates on politics, world, sports, entertainment and lifestyle, log on to our website latestly.com).